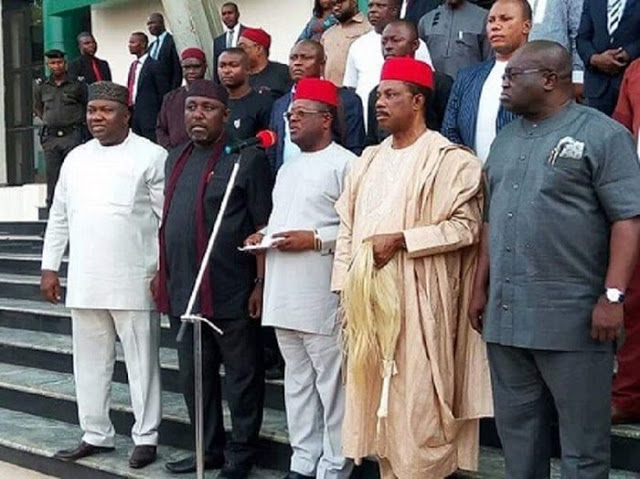 The Indigenous People of Biafra (IPOB) has warned the five southeast governors of an impending doom over what it described as crafted lies on the disappearance of Nnamdi Kanu.
This was contained in a statement by the group's spokesperson Emma Powerful. He chided the Governor Ikpeazu for imposing curfew on Abia State that preceded the invasion of  Kanu’s family home.
“Governor Okezie Ikpeazu and his co-conspirators  must give true account before the people of Biafra, how they allowed envy and jealousy over Kanu’s popularity to overwhelm them.
“Ikpeazu’s claim that he imposed a curfew during the invasion of our leader’s house in Umuahia, to save 11.6 million Igbo in the North is laughable.

“The only reason why Ikpeazu deliberately imposed a curfew in Abia state was to stop IPOB members from mobilising to defend our leader, Kanu, during the invasion of his home by soldiers.
“Ikpeazu’s sole reason for imposing the said curfew was to leave the compound of Kanu defenceless.

“Igbo governors and Ohanaeze Ndigbo also felt that the perfect way to demoralise the people of Biafra and stop our agitation is by killing everything in site in and around Isiama Afaraukwu village, to put fear in the heart of IPOB.
“The same way followers of Sheikh Ibrahim El-Zakzaky were slaughtered in their thousands in Zaria, with no consequence till date.
“What South East governors didn’t factor into their treacherous calculation is that IPOB is a global movement with a unique structure that no man can destroy.
“Ikpeazu and his cohorts are dreamers for thinking their well-crafted lies, which they have been selling to media houses can save them from the impending doom.
“Biafra restoration effort is a divine project, the sooner they realise this, the better,” Powerful said.
Follow Us on Twitter!