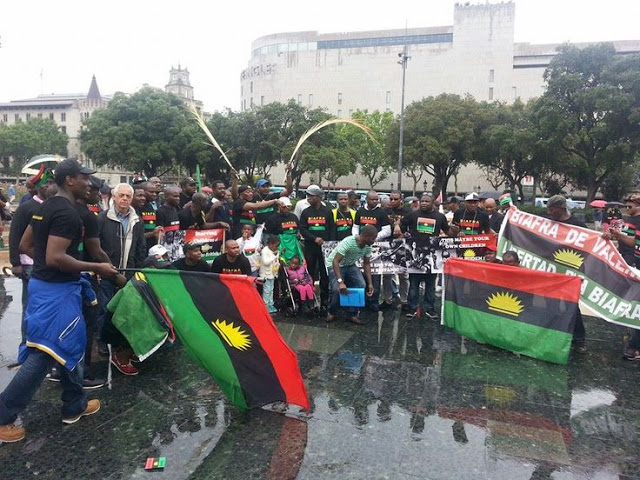 Biafra Nations Youth League, BNYL, has cautioned Minister of information, Lai Mohammed, over his comments that IPOB is dead.
The group warned that such declaration could lead to provocation in the South East and South South regions.
Mohammed had told newsmen that “the large turnout witnessed during the election has sounded the death knell on IPOB.
“I think what that proved really is that IPOB does not represent the good people of Anambra or any state in the South East.
“If truly they represented the people, the IPOB propaganda about the election really showed that they are not on ground.”
Reacting, BNYL Leader, Princewill Obuka, said “That old man does not know how determined the Biafrans are. He saw what happened during military raid.”
“Such resistance should have told them that Biafrans, if armed, would really consume Nigeria like Kanu was saying.

“He should respect his old age and turn attention to Boko Haram and Shiites”.

However, the group added that its ongoing grassroots engagements have been extended to various parts of Cross River.
“We have engaged mostly community youth leaders and even some community leaders in towns like Obudu, Bekwara, Ikom, and almost all the towns in Bakassi including ceded areas.
“What we have not done within the Cross River axis is meeting the paramount rulers but plans are on ground.
“In Rivers State we are organising a similar internal grassroots referendum programs in Ekpeye land of Ahoada East like we did in some towns in Akwa Ibom on the day we all stormed Onna to mark the death of our late leader, General Philip Effiong”.
Obuka added that the group is not inciting violence at the grassroots but detailing the people on progress of the Biafra struggle.
“We are doing what is expected of us. Our people have every right to know what is going on outside the grassroots.
“In places like Obanliku and Boki, there is poor network and people are anxious to know what is going on. We receive distress calls and complaints everyday from that part.
“We owe our people explanations, and much more engagements, which is why we initiated the internal referendum activities. In fact, many have built confidence on us and going back on Biafra independence pursuit will be difficult for us”.
Follow Us on Twitter!