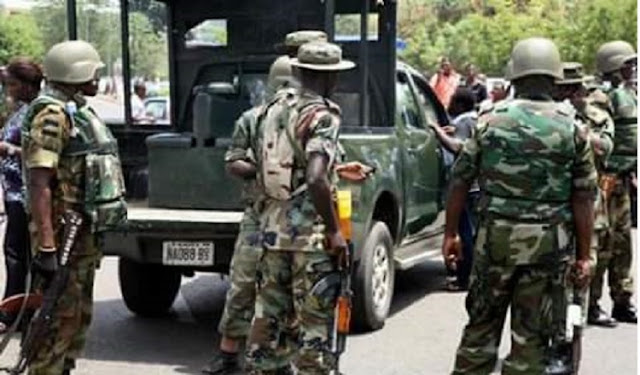 Seven persons have been arrested in Ondo State by soldiers attached to the 32 Artillery Brigade of the Nigerian Army, Akure, Ondo State.
The suspects include 4 persons and 3 Youth corps members serving in the state and their identity according to reports is yet to be made public were arrested for inviting unsuspecting girl friends to a hotel where they will ask them to put off their clothes and start taking their pictures in the nude.
They have been operating in Ikaramu Akoko in Akoko North West Local Government Area of Ondo State
They were said to have even resulted to blackmailing some of these girls who are from rich homes, demanding money from them with the threat of posting their pictures on the internet.

One of the sources said, “Many ladies, including their colleagues corps members have fallen victims and the suspects have been making good money from it before they were caught.

“They will invite their girlfriends to a hotel in Ikare Akoko and after making love with the ladies, they will take the nude pictures.


"Some days after they will be demanding money from the ladies they would threaten that if the ladies fail to give them the money, they will send their nude pictures to internet. Any of them who fails to give out money will find her naked pictures on the internet."

The Assistant Director, Army Public Relations, Major Ojo Adelegan confirmed the arrest of the suspects and said they had been handed over to the appropriate security organization for further action.