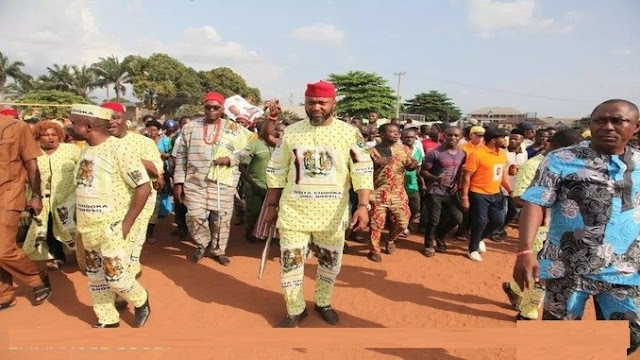 Good oratorical prowess, eloquence of motivational speeches and good articulation of issues shot President Obama from obscurity to the presidency of the most powerful country in the world, the United States of America.
Looking keenly at the political gladiators in the Anambra Guber elections, another Obama is in the offing. His articulation of issues simply stands him out and you can’t help but be wowed by his vast knowledge of the topical issues and the answer to them through his plans and well thought out programs.
William Shakespeare summised what has come to be the life of Chief Osita Chidoka, former Head of the Federal Road Safety Corp and former Aviation Minister. ‘’Some are born great, some achieve greatness and some have greatness trust upon them’’.

At 46 years of age, Osita Chidoka has simply achieved greatness in life and it only take you to hear him speak to know why this young man remain the best answer to the Anambra question and he stands tall with an intimidating profile when compared to other candidates in the Anambra Governorship race.
Monitoring a live radio broadcast in Odenigbo FM 99.1 on the 4th of November titled “ask Osita”, I could not help but giving thumbs up for the articulation of the UPP candidate. In fact, I completely agree with one of the callers who said he wished he can vote in Anambra, his choice would have been Osita Chidoka.

I am of the school of thought that if votable Anambrarians failed to ballot this man to power, they would have simply mortgaged their future and they will be the biggest losers. Chief Osita Chidoka sees the election of November 18, 2017 as a referendum on the future of the state.
A choice to either remain in a backward state or take their destinies in their own hands and vote for a revolutionary change. Osita Chidoka promised to base his administration on 3 cardinal principles he named UCHE which is the concept of Knowledge, of Intellect and discernment.
The second concept is the concept of UCHU which is the concept of hardwork, of resilience and perseverance and nobility in work as Ibos are renown for hard work. Finally, the concept of EGBUCHUKWU which is morality.
Using these 3 cardinal principles as a base, Osita promised to build on a 4 step pyramid with the acronym KNVES. This acronym stands for Knowledge, Vision, Execute and Sustain. With adequate knowledge of the present state of infrastructure of Anambra State from education to Health etc, a baseline will be drawn which will be the vision upon which to execute a master plan.

The execution of the master plan will have built in contingencies that will ensure sustainability irrespective of the administration coming to power in the future. For all these summarised plans, a review system called MMI which stands for Monitoring, Measuring and Improvement. Freedom of Information will be domesticated in Anambra under his watch according to Chief Osita.
All these are the framework of his administration when voted in.Chief Osita Chidoka as a pan Nigerian promised to abolish state of origin in Anambra.
According to him, anyone who resides in Anambra and pays his tax in Anambra will have every rights and privileges of an Anambra indigene and can aspire to any level in the civil service. This is because he believes being a Nigerian supersedes any other identity you may have.
With space not obviously enough to enumerate all the articulated plans of Chief Osita Chidoka, you are encouraged to watch this video to make up your mind especially if you are a voter in Anambra. Watch it solemnly and reflect on the deep rooted love and honesty as expressed by the candidate.
Let’s leave the voters of Anambra with this poser: If Anambra State is a question of future progress and development, could Chief Osita Chidoka, Ike Obosi, be the answer. Let Anambra voters decide. Naij.com hope they decide rightly.
Follow Us on Twitter!