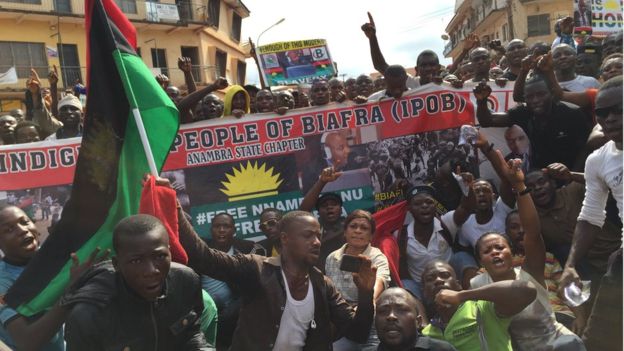 POPULAR columnist Ohereome Nnanna has urged the Anambra people to go out en masse and cast their vote on Saturday's governorship election in Anambra State.
He stated this in his article titled ''Ignore IPOB, go out and vote'' while calling attention to the folly and naivety of IPOB's call for election boycott describing it as a shot in the dark that will not yield any fruitful dividend.
He wrote:
''IF you ask the Indigenous Peoples of Biafra, IPOB,  and other Biafra independence activists  what they want, they will tell you they want a referendum to enable “the people” to separate from Nigerian and establish the Republic of Biafra. Ask them again who will organise the referendum, they will point towards the United Nations. They also believe the major Western powers, notably the United States, the United Kingdom and France, have the clout to put pressure on Nigeria’s rulers to allow “Biafra” to pull out of Nigeria.
The assumption on their part is that once the referendum is granted, the “Biafrans” will vote overwhelmingly to get out of Nigeria. They believe it is as simple as peeling and eating banana. It is this naïve mindset that appears to drive the mentality of today’s promoters of the Biafra utopia.
In truth, before you arrive at the portals of an independence referendum, the country from which you are breaking away has a BIG say in it. No power in the world can impose an independence referendum on a country which is unwilling to let go of any of its part. Any such attempt could result in a war, which the pro-independence section must win to achieve its objectives. Which country will add to its own headaches to fight for your independence, except there is a strategic self-interest in it for them?
For as long as the generality of Nigerians cling to the concept of the “indivisibility and indissolubility” of the Federal Republic of Nigeria, no section of this country will be allowed to break away. If any section of this tenuously “united” country is allowed to go (it does not matter if the area is as tiny as Ogoniland) the rest will suddenly develop unbearable appetites for independence, and no power can stop the disintegration of the country from that point.

All sections of the Nigerian ruling class, the major Western powers and the United Nations know this all too well. They also know the implication of such chaos descending on a country of 180 million-strong population. They will do everything in their power to assist Nigeria to stay together or part ways only if they can find a peaceful means of doing so.
Another daunting issue which the Biafra movements have not convincingly settled is the vexed matter of “who” the Biafrans are. IPOB and many of its sister groups romantically assume that Biafra includes the South East and South-South (perhaps, excluding Edo State) and some parts of Benue State. Again, there is a big problem with this assumption.
When the Military Governor of the defunct Eastern Region, Col. Chukwuemeka Odumegwu Ojukwu, declared the Republic of Biafra on 30th May 1967, he did so with the full mandate and backing of the leaders of all the ethnic groups in the Region. But when the civil war started, the Igbo people were largely abandoned to carry that heavy cross, which they could not sustain against the mighty federal forces backed by the major Western and Arab powers (except France).

While Mazi Nnamdi Kanu reigned supreme, he regularly received delegations from many Minority groups even outside the presumed catchment area of Biafra. Still a lot of Igbo and non-Igbo groups openly distanced themselves from the separatist agenda. Unlike the Scottish and Catalan cases Biafra is not a settled matter among the Igbo people let alone their neighbours within the former Eastern Region.
The Igbo people are too deeply involved in the Nigerian project to voluntarily abandon it – once again – and resume from the scratch. Igbo people have a saying: jide nke I ji. Hold on to what you have achieved. They deride the okpata otufue people: those who throw away or waste their achievements.
Though the Igbo man craves justice and equity within Nigeria or total freedom, he will no longer abandon what rightly belongs to him to other Nigerians out of rash emotional hoopla. It is against this background that I now address the Anambra election matter. In two days, the Anambra electorate will line up to vote for their next governor along with members of the State House of Assembly.
IPOB, which had been mute since its proscription and designation as a “terrorist” group by Muhammadu Buhari’s government, has once again, called for a “boycott” of the vote. As usual, IPOB has not explained the gains of a boycott. Rather, because it successfully called for a sit-at-home protest on 30th May this year, its leader, Mazi Nnamdi Kanu had assumed that a boycott of the Anambra poll would work. IPOB shut down Onitsha a few days ago in a reiteration of the call. I am hereby urging the good people of Anambra State to come out in their numbers and vote for a candidate of their choice out of the 37 odd governorship aspirants, as well as legislative candidates.
The boycott call is foolish in the extreme. It will produce no positive result. Even if the candidates and their family members alone come out to vote, backed up by their strong supporters throughout the state, all it requires is a simple majority and 25 per cent of votes cast in 14 local government areas and a new governor will emerge.
Even if the boycott call is heeded, the All Progressives Congress, APC, Federal Government will merely install an unpopular governor; a governor that is elected in spite of IPOB will emerge. He will have the grudge motive to treat IPOB and its adherents as political enemies in cahoots with the Federal agencies and instruments of coercion.
IPOB is on its own in the call for the Anambra poll boycott. All well meaning Igbo people should listen to Ohanaeze Ndi Igbo on all matters concerning their interests within the Nigerian commonwealth. ''