Alex Ekwueme Is Not Dead – Family 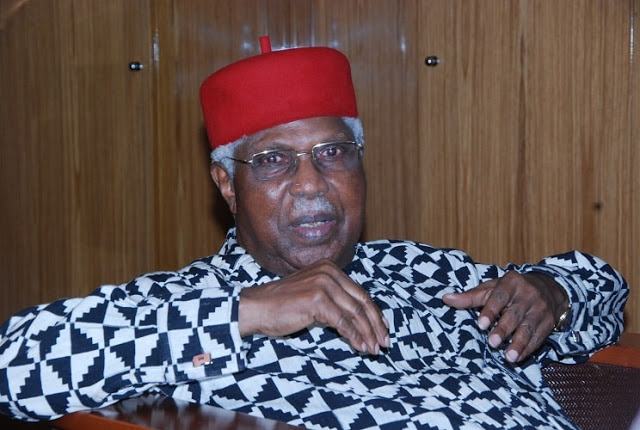 Former Nigeria’s Vice President, Dr. Alex Ekwueme is not dead, Family sources told ALEDEH.com
According to ALEDEH, the highly respected politician is alive and is yet to be flown abroad as stated in the report.
A family member disclosed to ALEDEH that the elder statesman is alive and well and that his condition has improved considerably.
Another family member who does not want to be mentioned, told ALEDEH that Ekwueme’s wife was with him last night, Monday, November 6, where she received calls from Canada demanding to know if the former VP had passed away.

The family source told ALEDEH that the Nigerian Government has forwarded a letter to an hospital abroad certifying that the government will take charge of the expenses.
“I can confirm to you that Dr. Ekwueme is in a very stable condition and his health is not deteriorating as reported in the media. Barring any last minute change, the former Vice President will be flown abroad at the weekend for full treatment”, the family source told ALEDEH.
Also confirming the news, Uche Ezechukwu, the Chairman, Editorial Board of the Authority newspaper, said Dr. Ekwueme has moved from a stage of unconsciousness to a state where he “now receives visitors, sits up and eats”.
Follow Us on Twitter!