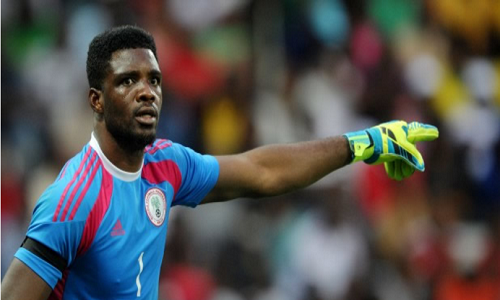 Daniel Akpeyi
Super Eagles goalkeeper Daniel Akpeyi  said  he was aware of the rules when he handled the ball outside the area during the first half of the friendly match between Nigeria and Argentina in Krasnodar, Russia, on Tuesday.
The Chippa United custodian  blamed the assistant referee for the mix-up, stating that the official had raised the flag for an offside before he handled the ball.

Although Argentina had a legitimate complain as the referee did not blow the whistle, television images showed Porto’s  Chidozie Awaziem backing Akpeyi, informing referee Bezborodov that the linesman’s flag was up.
“When Akpeyi saw the linesman with the flag, his mind did not tell him that the referee did not blow the whistle,’’ a source close to Daniel Akpeyi told allnigeriasoccer.com.
“He just dropped the ball to play the offside. It really broke his heart that they scored from the free-kick, and people will forget about the saves he made during the game.”