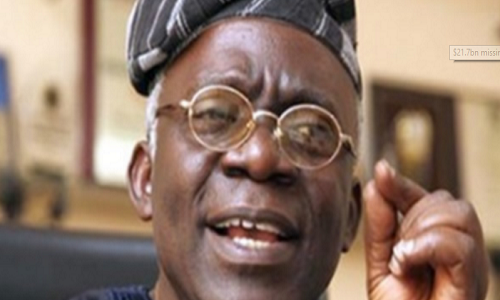 Femi Falana
A human rights lawyer Femi Falana (SAN), on Wednesday accused the Nigerian National Petroleum Corporation  of failing to remit over $21.7bn and N376bn since 1999.
The human rights activist said instead of piling up external loans, the Federal Government should be compelled by the Nigerian people to “embark on the immediate recovery and repatriation of hundreds of billions of dollars from the NNPC.”
Falana spoke  in Lagos at a National Seminar on Promoting Transparency and Accountability in the Recovery of Stolen Asset in Nigeria: Agenda for Reform.
The event was organised by Socio-Economic Rights and Accountability Project in collaboration with the Ford Foundation, United States of America.
A statement issued SERAP’s Deputy Director, Mr. Timothy Adewale, quoted Falana as saying at the event, that he had cause to petition the Economic and Financial Crimes Commission over, among other cases, the failure of the NNPC to remit the sum of $21.7bn to the Federal Government since 1999.
He said, “Convinced that the Federal Government was chasing the shadow in the fight against corruption, I have had cause to petition the Economic and Financial Crimes Commission to open the allegations of corruption which border on crimes against humanity. In the said petition I alleged as follows:

“From five cycles of independent audit reports covering 1999-2012 the National Extractive Industries Transparency Initiative revealed that the Nigerian National Petroleum Corporation, some oil companies and certain agencies of the Federal Government have withheld $20.2bn from the Federation Account. In the 2016 audit report released by NEITI in March 2017 the figure was said to have jumped to $21.7bn and N376bn.
“In 2006, the Central Bank of Nigeria removed $7bn from the nation’s external reserves and placed same as deposit in 14 Nigerian banks. In 2008, the Bank gave a bailout of N600bn ($4bn) to the same banks. Up till now the CBN has failed to recover the said sum of $11bn from the banks.
“On September 6, 2016 the Nigerian National Petroleum Corporation announced that arrangements had been concluded to recover the sum of $9.6bn in over-deducted tax benefits from joint venture partners on major capital projects and oil swap contracts.. The NNPC is said to have recovered the said sum of $9.6 bn but has not same remitted same into the Federation Account.”