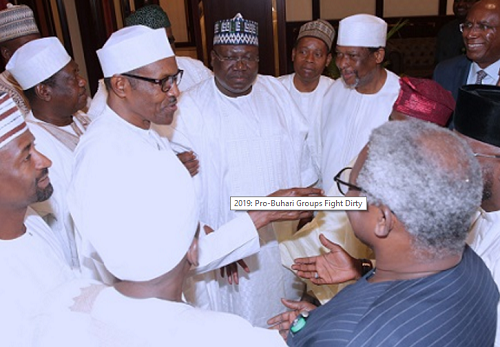 There appears to be a clash of interest among the coalition that binds together the various support groups of President Muhammadu Buhari even as a faction, Coalition Of APC Support Groups has lashed out at another faction, National Committee For Buhari Support Groups (NCBSG).
This is even as the Coalition of APC Support Group claims the NCBSG is people led by “liars and deceit individuals, cautioning President Buhari to be wary of those who will use his image to score cheap political goal.

This was the thrust of their address as read by Amb Lawal Mohammed Munir to media men in Abuja yesterday, just as it insisted that the NCBSG was not active at the formative years of the group and never worked for the success of the present administration during the elections.

Munir said: “The coalition of APC Support Groups find it strange and shocking to see the rise of a body that is an embodiment of liar and deceitful individuals in the guise of National Committee For Buhari Support Groups (NCBSG) in the presidential villa with Mr President claiming to represent the interests of the numerous support Groups.
“This addressed therefore, is to make clear to Mr President and Nigerians that the visitors Mr President received on Friday 27/10/2017 at the state house wit the above mentioned name are liars as they claimed to represent Support Groups.
The group who listed members of the NCBSG as Senators George Akume, Ahmed Lawal, Abu Ibrahim, Alh Yusuf Nalado, Zakari Aliyu and others insisted that the group they claim to represent is nonexistent.
The group further said the address became necessary in view of the fact that “it has become pertinent for is to state that we are now witnessing misguided efforts by some mischievous elements and vested interest groups trying to take advantage of our collective struggle to further their selfish political interest “.
Follow Us on Twitter!