2019: Nigerians'll Stone Us If We Present Buhari – APC Group 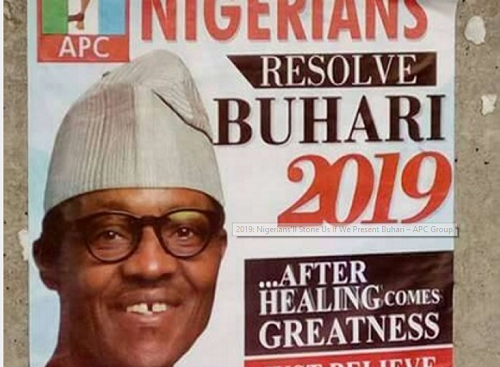 Members of the defunct Congress For Progressive Change (CPC) from the 17 southern states of Nigeria, have said fielding President Muhammadu Buhari in the 2019 Presidential election will incur the wrath of Nigerians and cost the ruling APC the election.
The group which goes under the banner of Southern Mandate of Nigeria (SMN), said Nigerians will stone them at campaign grounds if Buhari is presented as their presidential candidate.
National Coordinator of the group, Comrade Francis Ikonomwan, in a statement made available to journalists in Benin, Edo State, described the call by members of Buhari Support Group on President Mohammadu Buhari to contest the 2019 election, as political sycophancy.
He described members of the Buhari Support Group as a “bunch of people who do not mean well for our Party, APC, and Nigerians at large, but rather, they represent their selfish interest.”