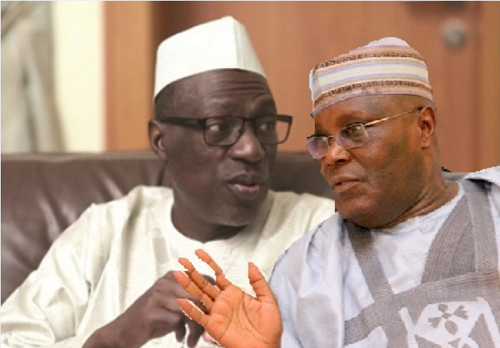 A major crisis has brewed in the opposition Peoples Democratic Party in Adamawa State as the former Vice President, Alhaji Atiku Abubakar has been accused of hijacking last Saturday ward congress in the state.
Raising the alarm is a former Special Assistant to Vice-President Atiku Abubakar and a chieftain of the Peoples Democratic Party, Dr. Umar Ardo.
Ardo according to Punch Newspaper report has called for the cancellation of the results of last Saturday ward congresses in Adamawa State. He accused Atiku of hijacking the party in the state.
Atiku, a former member of the PDP, defected to the All Progressives Congress before the 2015 general elections.

Ardo spoke with journalists on Tuesday after submitting a petition to the Adamawa State PDP Congress Appeal Panel at the party’s national headquarters in Abuja.

He said, “No election took place in Toungo, Ganye Mayo Belwa, Demsa, Numan, Shelleng, Yola North, Yola South, Mubi South, Michika and Madagali local government areas. “The Caretaker Committee members representing these LGAs simply sat in their rooms and drew up their list and submitted their names as elected executive members and they were admitted.
“It’s an open secret that the members of the committee connived and simply sat down and distributed the party offices among themselves.”
On the specific roles played by Atiku in the congresses, Ardo said the former Vice-President “was involved directly. He called me to say that I should make sure certain persons get these positions. I disagreed. He has hijacked the PDP in the state.”
He observed that Atiku’s return to the PDP had its disadvantages, saying, “There are also three disadvantages. We learnt that Atiku is coming back to the party with an ambition; an ambition to contest for the Presidency.
“Now that will be a source of conflict because there are others in the party who are also interested and they are nursing this ambition. There will be conflict among party members.
“Secondly, the deep pocket that Atiku has will not only serve that ambition; it will also deepen the conflict. The third disadvantage is that those foot soldiers will also serve the ambition and in the process deepen the conflict.”
But in his reaction, Atiku insisted that he had no hands in the problems of the PDP in his state, adding that he had left the PDP.
The former vice-president spoke through his media aide, Mr. Paul Ibe.
“It is ludicrous to accuse a man who is not a member of a party of having hijacked the party structure. Whoever is making this allegation has to look elsewhere for their failings,” Ibe said.
Follow Us on Twitter!