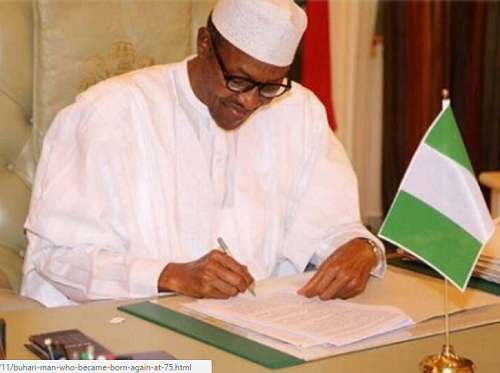 No fewer than 2,000 members of the ruling All Progressives Congress (APC)  have signified their intention to become Ministers and members of boards of parastatals in President Muhammadu Buhari’s cabinet. Nigerian NewsDirect has learnt.
President Buhari had announced his intention to appoint more Ministers and also re-constitute the boards of parastatals during the National Executive Council (NEC) meeting of the party in Abuja a forthnight ago.
Plans to make additional appointments is coming at a time the economy remains sluggish despite a slight increase in the price of crude oil in the international market above $60 per barrel. Buhari had presented a borrowing plan of $29.960 billion to the National Assembly for funding of capital projects. This was however rejected by the Federal lawmakers on the grounds that it amounts to mortgaging the future of the unborn generation.
According to Buhari, the “compressed federal executive council will be expanded to bring in more supporters at Federal Level, with fresh ideas to be injected into the government”. “Last year, I said we would re-constitute the Boards of Parastatals. I must regret the fact that we have not done so, for many reasons. “Some of us in this meeting may know I had given instructions since October 2015 for this exercise to start. But there have been inordinate delays through several Committees in an attempt to get the balance right and to make sure all parts of the country are equitably represented.
“On the other hand, I am keenly aware that our supporters are very eager for these appointments to be announced. By the grace of God these appointments will be announced soon. Especially now that the economy is improving, we will have the resources to cater for the appointees,” he said.
Section 147, subsection 3 of 1999 constitution states that President shall appoint at least one Minister from each state, who shall be an indigene of such state.
The statement of the President came few days after members of the Buhari Support Organization which is the umbrella body of groups and association that canvassed for votes for the President in the run up to 2015 general election complained that many of the party loyalists who laboured and toiled for the party to achieve victory have been abandoned.
According to the Comptroller-General of Customs, Col Hameed Ali (retd) , many of those in positions of authority in the present government are from the opposition Peoples Democratic Party (PDP).
Ali had lamented the party was gradually losing its core values, vision and mission, adding that more than 50 percent of the positions in the Buhari government are being held by members of the PDP who fought against the actualisation of a Buhari Presidency.
A source close to the Presidency reliably informed Nigerian NewsDirect that various power blocks have been drawing lists to present to the President. Some of the groups according to our investigation include, BSO, which is made up of core Buhari’s loyalists from the defunct Congress for Progressive Change (CPC). Others include South East APC  forum led by Ogbonnaya Onu, Asiwaju Support group, which is loyal to former Lagos State governor, Asiwaju Bola Tinubu, however, the sudden death of Jide, Tinubu’s son may slow work in the group.
“The death of the 42-year-old lawyer really affected Tinubu morally, spiritually and physically,” a close confidant of Tinubu told Nigerian NewsDirect.
Other power blocks in the party include New Southwest Progressives led by Ogun State governor, Senator Ibikunle Amosun. Other members of the group include Minister of Mines and Steel, Kayode Fayemi, Ondo State governor, Rotimi Akeredolu, former Lagos State governor, Raji Fashola and National Legal Adviser of APC, Muiz Banire.

The Senate President, Bukola Saraki and Speaker of House of Representatives, Yakubu Dogara will also be given a slot each. However, it’s not clear if they will be given Ministerial slots from their states or plum board of parastatals posts. Saraki, who is from Kwara State is being represented by Minister of information Lai Mohammed while Dogara from Bauchi state is being represented at the Federal Executive Council by Minister of Education, Mallam Adamu Adamu who is also an old friend of President Buhari.
All APC state governors and members of Buhari’s kitchen cabinet popularly referred to as Aso Rock cabals will also present candidates for the President to consider.
It is unclear if former Vice President, Abubakar Atiku will be allowed to present candidates. The two prominent candidates of Atiku in Buhari’s government include, the Minister of Women Affairs, Senator Aisha Alhassan and the Senior Special Assistant to the president on media and publicity, Mallam Garba Shehu.
However, feelers from Abuja indicates that many of the blocks are also trying to outwit one another and demonstrate they are more formidable than the other.
When asked if this would not polarise the party, a chieftain of the party who is a former House of Representatives member told Nigerian NewsDirect that there was no cause for alarm.
“This is the essence of party politics, people must jostle for posts to showcase their capability. It is natural to be ambitious but I want to assure you that the party will handle the situation very well, there is no cause for alarm” he assured.
Meanwhile, financial analysts said that appointment of additional ministers would worsen 2017 budget deficit  of N2.3 trillion being financed with loans.
Nigeria had recorded a Government Budget deficit equal to 2.10 percent of the country’s Gross Domestic Product in 2016.
The 2017 budget, tagged Budget of Recovery and Growth, is estimated at N7.44 trillion, an increase of 22.8 per cent from the N6.06 trillion of 2016. The federal government proposed, in the budget, a revenue projection of N5.08trillion and an aggregate expenditure of N7.44trillion, translating to fiscal deficit of N2.36trillion, which is planned to be financed largely by borrowing. The fiscal deficit is about 2.18 percent of the Gross Domestic Product.
In the revised budget passed by the National Assembly, N2.987 trillion was allocated for non-debt recurrent expenditure of the MDAs that are not under statutory transfers club while capital expenditure is estimated at N2.177 trillion. For debt service, the federal government voted N1.488 trillion to service domestic debts; N175.883 billion for foreign debts; and N177.460 billion for sinking fund to retire maturing loans, totalling N1.841 trillion for debt service.
Civil Society Legislative and Advocacy Centre (CISLAC), had expressed concern over the Federal Government’s plans to borrow $5 billion to finance the budget and called on the supervisory committees in the National Assembly to vigorously interrogate the move.
“CISLAC finds it disturbing that a country that is posting a debt to GDP ratio of 16 per cent and a budget deficit of about 31 per cent of her annual budget in 2017, planning to borrow another $5 billion (about N1.9 trillion) to fund the 2017 budget, while already spending about 36 per cent of scarce revenues to service debts and is in danger of losing international funding to provide social services, still finds it convenient to concede revenues through the use of incentives. That this is done in exchange for road construction is quite embarrassing and an indictment of the government.”
Follow Us on Twitter!