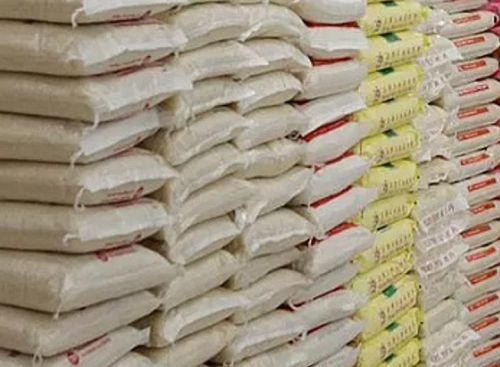 Mallam Aminu Goronyo, the National President, Rice Farmers Association of Nigeria (RIFAN) on Wednesday said the farmers would crash the price of 50kg of rice to about N6000 if the government provide the necessary farm inputs to reduce the cost of production.
Mallam Goronyo who disclosed this after a meeting between the RIFA, Rice Processors and the Minister of Agriculture and Rural Development, noted that in few months’ time, if appropriate measures were taken by the government to ease the stress of rice production, the price of rice will crash in the market.
Currently, the price of 50kg bag of rice is sold for N18,000 across the country, but after a meeting between the RIFAN and Rice Processors, they agreed to reduce the price of rice paddy which was N50,000, to N110,000 per ton, this move will further crash the price of rice from N16,000 to N13,500 per bag.
Goronyo therefore said “this is just the beginning, the actual and real price should even come down because we are expecting a bumper harvest this year and we have sat down with the millers and agreed that we are going to work together for the interest of Nigerians.
“We are expecting that the price of 50kg rice to drop to N6,000 per bag, just give us the next few months, you have heard what the Minister said, our major challenge is cost of production, the minister has promised to bring down the cost of production to the nearest minimum.

Also speaking after the meeting the National President of Rice Processors Association of Nigeria, Mohammed Abubakar said the meeting with the Minister was basically to inform him (the Minister) of the decision by the rice farmers and Processors to reduce the price of rice to N13,500 per 50kg bag.
His words: “We came here to inform the Minister of our agreement with the farms on the price of paddy, to let the Minister know that we have agreed on a price per ton of paddy for this year 2017 and 2018 wet season harvest for N110,000 per ton, as against the N150,000 we buy initially, and we were selling the rice for N16,000 per 50 kg bag, so if this works, we will sell the bag of rice for N13,500 according to where you are buying from.
In his response, the Minster of Agriculture and Rural Development, Chief Audu Ogbeh noted if the price of rice is crashed to N13,500, the smugglers’ margin will become too small.
He said the government will continue to procure farm machines to assist the rice farmers to ease the stress of rice production, and consequently further crash the prices of rice in the market.
“The biggest enemy of the Nigerian rice farmers and processors are the smugglers, if the price of rice falls to N13,500, smugglers margin becomes too small and we hope that the measures we are going to take can end the smuggling of rice and many other things.
“We will help you ease the burden of rice farming, last year, we procured 8,000 threshers, this year we are going to procure another 2,500 threshers, and we are bringing small reapers to distribute to your farmers, so they can cut the rice with the machine thresh it with the machine, willow it and put it in the sack, and take away all that stress which makes rice farming very difficult.
“I assure you government will continue to procure and support rice farmers so that you can keep to the price you have agreed of a N110,000”, the minister added.
Follow Us on Twitter!