Home » news » So Sad!! Watch Heartbreaking Video Of How A Vehicle Skid Off Third Mainland Bridge Into Lagos Lagoon Killing One Instantly {Must See}

So Sad!! Watch Heartbreaking Video Of How A Vehicle Skid Off Third Mainland Bridge Into Lagos Lagoon Killing One Instantly {Must See} 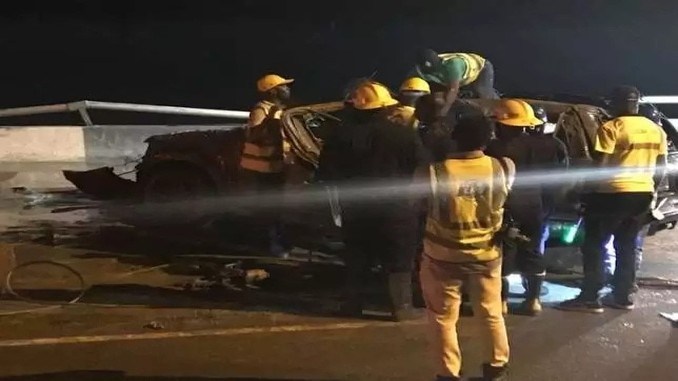 May the soul of the dead rest in peace…Amen….
The incident occoured on Third Mainland Bridge, the body of the driver has been retrieved One man has been confirmed dead after an accident on Third Mainland Bridge that sent a vehicle flying off the bridge and plunging into the Lagoon.
According to The Nation, the accident occurred on the bridge late in the evening on Saturday, October 28. It was reported that the accident occurred between two vehicles at the last quarter of the Third Mainland Bridge close to Oworonshoki.
Operatives of the Lagos State Emergency Management Agency (LASEMA) Response Unit (LRU) were on hand although it was reported that it took them 25minutes to get the vehicle out of the lagoon.
It was reported that occupants of the other vehicle involved in the accident fled the scene for fear of being accused of the death of the man whose vehicle plunged into the lagoon.
The driver reportedly said: “If the police come here, they’ll say we caused the accident and arrest us,” By the time the vehicle was retrieved, the occupant was already dead and his body taken away.