Sen. Akpan Threatens To Kill Me - PDP Lawyer Cries Out To Police IG As Battle for A’Ibom senatorial seat takes a dangerous stride 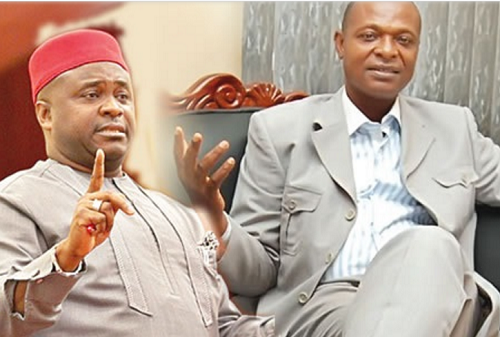 *PDP lawyer writes IGP over Senator Akpan’s threat to kill him for withdrawing PDP’s appeal against his sack*Says Senator Akpan attacked him in his office, snapped him and threatens his life if he loses his seat*Begs IGP to save his life

By Dansu Peter
The battle for the Akwa Ibom North East Senatorial District seat at the National Assembly has taken a dangerous dimension.
This is because a lawyer in the legal unit of the Peoples Democratic Party (PDP), Barrister Ochai Jacob Otokpa, has written the Inspector General of Police, Ibrahim Idris, alleging threat to his life by Senator Bassey Albert Akpan, for filing a process in court to discontinue an appeal by PDP against a judgment of the Federal high court, Uyo which sacked him from office.
Akpan is the senator illegally recognised by Senate President, Dr Bukola Saraki to represent Akwa Ibom North East Senatorial District at the National Assembly against the valid decision of the Federal high court, Uyo delivered since February 27, 2017 which ordered the senate to swear in Mr Bassey Etim as the senator-elect to represent the district.
Otokpa who is a legal assistant to the National Legal Adviser of the PDP said he would not understand why a lawmaker would be so desperate to engage in such an act when he was only doing what he was authorised to do by his employer.
In a petition by Firma Nexus Chambers on his behalf dated September 25 and received at the Police Headquarters on September 28, 2017, Otokpa alleged that Senator Akpan invaded his office with thugs, locked him up in the inner office of the National Legal Adviser of the PDP and harassed him thoroughly, snapped him with his phone and threatened to take his life should he lose his seat at the National Assembly.
He said : “It is our client’s brief that on Tuesday, 19th September, 2017, at about 4:00pm, senator Bassey Albert Akpan invaded the office of the National legal Adviser of the party (PDP) at the National Secretariat, Wadata Plaza with thugs numbering between four and six in apparent attempt to injure or assassinate himour client.
“It is our client’s brief that Senator Bassey Albert Akpan entered the inner office of the National Legal Adviser and our client was called to come in and when our client entered, Senator akpan asked our client if he is Barr Ochai and our client answered in the affirmative.
“Immediately, Senator Bassey Akpan took picture of our client with his phone and locked the door, put the key in his pocket and started assaulting our client, threatening to kill him for carrying out the lawful instruction given to him to file notice of withdrawal of the Appeal of the party.
“In fear for his life, our client upon appreciating the hostile intention of Senator bassey albert Akpan started screaming and shouting out to those in the outer office and succeeded in raising sufficient alarm that drew and alerted the people in the outer office as to what was about to happen to our client. Those in the outer office hit the door repeatedly, asking Senator Bassey Albert Akpan to open but he refused.
“The security operatives attached to the National Secretariat of the party were contacted and as they responded to our client’s shot for help, Senator Bassey Akpan opened the door saying that the National Chairman of the party was calling him.
“While he locked our client and thereby unlawfully restraining him, Senator Bassey Akpan issued threats to our client that our client’s life depends on the outcome of the appeals in court and that should he lose the case in the court leading to loss of his seat in the senate, he (Senator Akpan)will make sure our client loses his life. He boasted repeatedly that he has the requisite financial, political and positional capacity to ‘crush’ our client and that nothing will happen noting that he does not know the value of our client’s life that he cannot destroy it and go unscathed.

“It is our client’s further brief that while he was leaving the office, one of the thugsbrought by Senator Akpan confronted our client and told him to be praying for Senator Akpan to win the court case and retain his seat in the senate and that in the event that Senator Bassey Akpan loses the case, our client will be a dead man,” adding that ever since, he had been noticing strange people and cars trailing him and that his car had once been burgled while sensitive documents were carted away.
It would be recalled that the PDP had recently requested the Court of Appeal sitting in Calabar to dismiss its appeal lodged against a judgment of the Federal high court, Uyo which sacked Mr Albert Akpan from the National Assembly and declared Hon Bassey Etim as lawful replacement.
The party said the judgment of the Uyo Federal high court which sacked Akpan from the Senate for not being its authentic candidate for the 2015 Akwa Ibom senatorial election was not against its interest, hence, unnecessary and ought not to have been filed in the first place.
In the notice of discontinuance of the appeal, the PDP told the appellate court thus: ”Take notice that the Appellant (PDP) hereby withdraws all the processes including the Notice of Appeal and the brief of argument filed by the erstwhile counsel for the party.”
The decision of the PDP under the leadership of Senator Ahmed Makarfi to withdraw the appeal, it was learnt, was in the spirit of on-going reconciliation in the party and its dogged commitment to bring sanity into the party as it prepares itself for the 2019 general poll in the country.
The background of the unfolding event is that a Federal high court sitting in Uyo had on February 27, 2017, in a judgment, booted out Mr Bassey Albert Akpan from the National Assembly.
That was after the court found that Mr Akpan was not the valid and bonafide candidate of the Peoples Democratic Party (PDP) which won the 2015 general election for the Akwa Ibom North East senatorial seat.
The high court, in the judgment on a pre-election dispute between a former member of House of Representatives, Hon Bassey Etim and Senator Akpan over who between them was the authentic candidate of the PDP for the senatorial seat, specifically held that Akpan had wrongly and illegally represented the Akwa Ibom North East Senatorial District in the National Assembly for 628 days.
The life span of the current 8th National Assembly is 1,460 days, commencing from June 9, 2015 when it was inaugurated, to expire June 9, 2019.
The trial Federal high court consequently ordered Akpan to vacate forthwith the seat for the bonafide candidate of the PDP, Hon Bassey Etim for the remaining 812 days, and refund to the coffer of the National Assembly, within 90 days, all monies he had collected by way of salary and allowances for the 628 days during which he illegally occupied the seat in the senate.
Besides, the court ordered the Independent National Electoral Commission (INEC) to retrieve the certificate of return earlier issued to Akpan and issue a fresh one to the newly declared senator-elect, Mr Bassey Etim, to enable him proceed to the senate for his swearing-in.
INEC had since complied with the court order as it issued the certificate of return to Bassey Etim.
But the Senate President, Dr Bukola Saraki had flagrantly refused to obey the judgment of the Federal high court, Uyo which directed him to inaugurate Bassey Etim to begin to perform the functions of his office.
He had said that he had sent the positive judgment of the court to the legal department of the National Assembly for legal advice on what to do.
Hear him: “There’s a process to this and when I get this I always get informed. There are always two sides to a story; I have a senator who says this is the case.
“I referred the case to the legal unit to give me a clear advice on this, and once they advise me, I will comply.
“ I have explained that to the senator that I have no interest; I want the people of Akwa Ibom, which Senator Akpan represents, to have a representation. I don’t gain anything in it.
“I will follow it and I will make it happen,” he said.
But a one-time Chief Judge of Lagos State, Justice Samuel Omotunde Ilori had dismissed as ridiculous, untenable and contemptuous the refusal by Saraki to swear in Hon Bassey Etim as ordered by a competent court of jurisdiction.
The cerebral judge had said the senate president is not at liberty to seek advice on a positive order of the court.
Saraki had also spurned the legal advice from the Office of the Attorney-General of the Federation, Mr Abubakar Malami (SAN) which counselled him to swear in Hon Bassey Etim since there was no stay of execution to stop the implementation of the valid and subsisting high court judgment.
Bar and Bench Watch reports that all efforts by Senator Akpan to get a stay of execution since February 27, 2017 till date, to stop Hon Bassey Etim from reaping the fruit of his legal victory in court proved abortive.
Worse still, his political party (PDP) which went on appeal with him to challenge the electoral victory of Hon Bassey Etim and the sack of Mr Albert Akpan had also filed a notice of discontinuance of its appeal which it said was unnecessary since it was not against the political party’s interest.
Follow Us on Twitter!