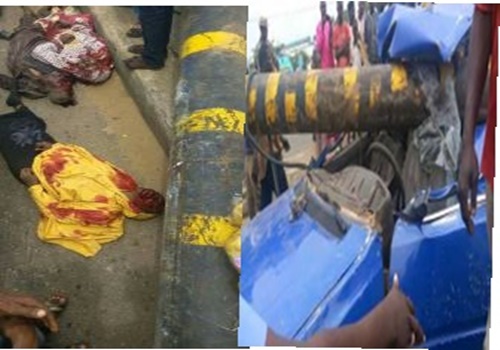 Meanwhile, because of the delay in arrival of police and emergency services at the scene, thieves stole the wallet and mobile phone of late Ms Rabi Adam. They had the audacity to use the stolen phone to call her parents and tell them that their daughter had died in a ghastly accident.
CUPS investigator, who spoke with Ms Rabi’s colleague, learnt that this is the third time that the same type of incidence happened at the same spot, taking innocent lives. The root cause of the problem is the bad engineering of the barrier pole. The money allocated to erect a foolproof barrier has been siphoned off. This makeshift barrier pole is poorly soldered. It is not fit for purpose. Each time it is hit by reckless drivers, the poor soldering gives way. The barrier pole then drops and causes fatalities.
Unless somebody in charge of roads at Kaduna state looks into this disgraceful and criminal negligence, our people will keep losing their lives at the Kawo flyover bridge. May the souls of the deceased rest in peace. Amen.