Home » opinion » President Buhari Is Not An APC President, But The President Of The Federal Republic Of Nigeria Including The Witches And Wizards Of This Country, Dino Melaye Declares.

President Buhari Is Not An APC President, But The President Of The Federal Republic Of Nigeria Including The Witches And Wizards Of This Country, Dino Melaye Declares. 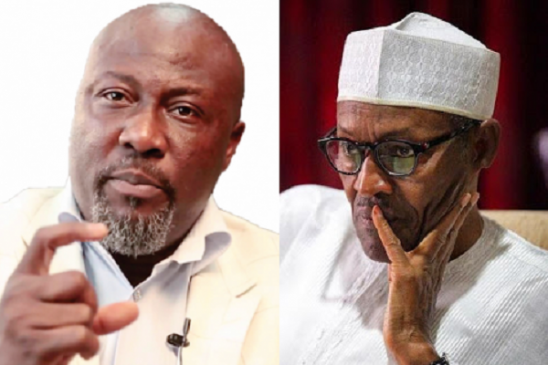 Senator Dino Melaye says President Buhari has the wrong people in wrong positions and that there is a lot of nepotism in appointments in this government. According to him, President Buhari cannot be making appointments based on politics because he is the president of everyone in the country including the witches and wizards.
Dino said this in a chat with National Assembly TV that is anchored by Bamikole Omisore.
Read excerpts of the interview below;
“Cabinet reshuffle has to do with the ministers. We have strategic positions in this country that is manned by wrong people; a coach is as good as members of his team.
The President cannot be a Minister of petroleum, Minister of Internal Affairs but if he has good aides, the economy will move because these people will be working within their terrain. If a tailoring work is given to a carpenter, the output will be a beautiful nonsense.
The president must rejig his appointments. The president should forget about politics and bring out people with vigor, better hands that will get the job done. Such people should be involved in the process irrespective of the party they belong or their tribes.

The SGF misbehaved because he has never worked in any public service in his life before becoming the SGF. The SGF of a country is the manager of the entire process of Governance.  A man that is not imbibed and indoctrinated in the act of civil administration  or the rudiments of public administration, definitely he will misbehave.

His appointment is synonymous to someone wearing an oversized shoe and this is applicable to other appointments in this government, there are a lot of nepotism in appointment in this government” he said
Dino said the extent at which the 2017 budget has been implemented by this administration shows that the administration has square pegs in round holes.
“If fifteen percent of the 2017 budget has just been implemented by October 2017, by March, what percentage should we expect? To be realistic, we will continue to roll over error if we don’t get the right thing to do. The executive must be sincere that there is no money.
There is no point brining a budget of seven trillion when we can only spend and afford two trillion. We must be sincere with ourselves. Leaders are not meant to be deceptive, they are meant to open up. Let Nigerians know we are in a precarious situation.
Why will you present a budget of seven trillion when from your internally generated revenue and the sale of crude oil you can only get two trillion? Where do you expect to get the remaining five trillion to run the budget? At the end of the day, you will spend two trillion out of the seven trillion and spending two trillion out of seven trillion will give us a failed result.
The executive should come open to Nigerians by making it clear that we can only spend two trillion and they prepare a budget of two trillion. Let me tell you, in this government, we have square pegs in round holes.  You cannot give carpentry work to a tailor and you expect him to perform. We need to rejig the economy managers of this nation because you cannot give what you don’t have”
Speaking further, Dino said President Buhari should forget about politics when making appointments as he is not just the president of APC but the President of Nigeria including the witches and wizards in the country
“Like I told you earlier, it’s not all about party. Even the president is not an APC president but the president of the federal republic of Nigeria including the witches and wizards of this country. He is the president of everybody. Development process is national  and no one should be partisan about it.
If you find a good man in PDP or APGA that can do the job perfectly, appoint him or her in the interest of National development than to bring an APC man that has no idea of what to do. Today in this country there is an organization headed in this country by a lawyer, what do we expect from such appointment? We have ministers that have no cognate experience at all on where to serve. Do you screen ministerial nominees? We just insisted now.
Do you remember that I brought a motion on the floor of Senate to screen ministers? Now the president must attach their portfolios to us. If portfolios are attached, we can now ask questions in that area of discipline and see if he is capacitated, experienced enough, knowledgeable enough and has the technical know how to manage that particular portfolio. Except that is done, we will continue to run into crisis” he said
Follow Us on Twitter!