Home » global » PHOTOS: Traffic Jam Force Indonesia President Out Of Car As He Walks 2Km To State Event, Can This Ever Happen In Nigeria?

PHOTOS: Traffic Jam Force Indonesia President Out Of Car As He Walks 2Km To State Event, Can This Ever Happen In Nigeria? 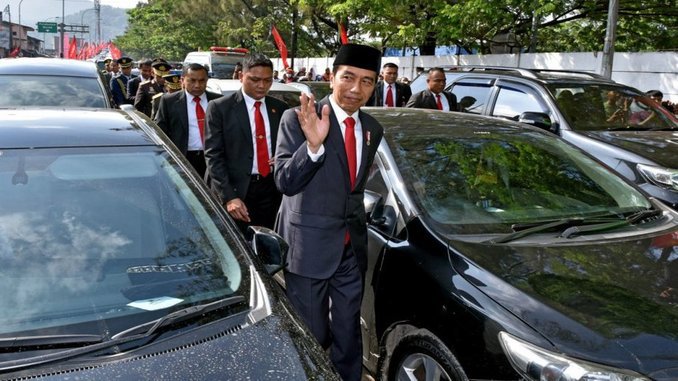 President Joko Widodo of Indonesia, on his way to an important state event, got stuck in traffic forcing him and his security detail to get out of his car and walk 2 kilometers to get there.
Indonesia’s notorious traffic congestion was on display for the world Thursday after the country’s president was forced to walk two kilometres through the scorching heat to attend a military parade.
Widodo and senior government officials were held up by gridlock as they approached the military parade in Cilegon, a port city about two and a half hours drive from the capital Jakarta, the presidential palace said.

After a 30-minute wait, “the president then decided from inside the car that he would walk,” Widodo’s guard Ili Dasili said in a statement.
National police chief Tito Karnavian, who was also stuck in the jam, joined the president.