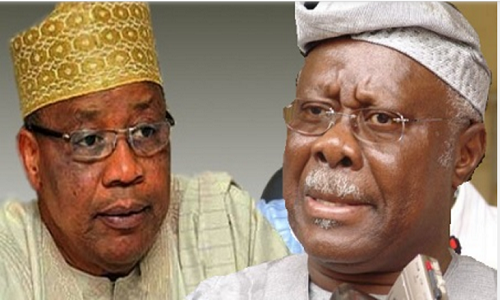 Former military President, General Ibrahim Badamasi Babangida (rtd), may have dumped Chief Bode George as the chairmanship race of the Peoples Democratic Party (PDP) intensifies.
Babangida wednesday evening threw his full weight behind former Ogun State Governor, Gbenga Daniel.
Daniel had called on the former military president as part of his consultation with the stakeholders of the party in the race to the PDP chairmanship slated for December.
“I am supporting you because I know you very well. Gbenga Daniel, you’re my Chairman
“I was elated when I first heard that you are interested in volunteering yourself for this great service to our country. You represent the breadth of fresh air that the party deserves at this stage.
“I know Daniel very well and I know his unparalleled capacity for work. I have a strong conviction that with him as chairman, the party can be turned around again.”
Babangida described the former governor as “My chairman-in-waiting.”
Speaking earlier, Daniel said he came to notify the former military president of his ambition, stressing that no serious politician in the country would embark on such an important national task without seeking the wisdom and blessing of the Minna-born retired army general.
Meanwhile, Geaorge, a former National Deputy Chairman of the PDP, formally announced his bid to become the national chairman of the party yesterday.
Speaking at an interactive session with journalists in Lagos, he said God had given PDP a second chance which the party must take advantage of.
He said God had used the Supreme Court to save PDP from disintegration and called on members of the party not to bungle the opportunity by ensuring that only people with the requisite experienced were elected to run the parties.
He said: “We are fighting a party that is now a colossus. Politics is war by other means. So we must get it right if indeed we want to return to power in 2019. I want all those contesting to also let us debate before our members so we can tell them our plans and be able to convince them. That is democracy.”
He said PDP must take up the challenge threw at the opposition by President Muhammadu Buhari.
He said: “The President (Buhari) himself said it when leaders of all political parties visited him at the villa recently. This nation needs a vibrant opposition. Buhari knows that for this nation to survive, it needs a constructive not abusive opposition. Nation building is a work in progress.

“As a party, we are at the crossroads, and if we turn the wrong way, we may not make it. God is a God of second chance. He has given us a second chance. It is a matter of life and death for the party. We must sit down and decide on who will manage the party to give a constructive and people oriented criticisms to the government in power.
“We have a short time, between our election and the next sets of elections in 2019. It has nothing to do with emotions and tribal sentiments. We have to get it dead right. We need a person who can weather the storm and face the battle ahead. To extract the seed inside palm kernel is not a joke, because when you apply the harmer, you have to watch your fingers. It is a major decision, not only for our party but for the country.
“We need someone with a track record, someone who has been through the storm. We must avoid the pitfalls of the past. This is not the time for experimentation. “
Justifying why the chairman of the party must come from the south-west, he explained: “Within the South-west, we have Ondo/Ekiti, one zone, Lagos/Ogun, one zone, Osun/Oyo, another zone. The current National Vice Chairman of the party is from Ondo/Ekiti. It was zoned there because Lagos/Ogun, Osun/Oyo, have all served their terms in the past. So now, it is turn of Ogun/Lagos again.
The South-east had it. South-south had it in acting capacity. At any rate, they just left the presidency and it was in the light of this that members at a meeting unanimously asked the South-west to produce the national chairman.
“As a party, thank God we did not get a technical knockout; we only got a bloody nose. But we must learn from our past mistakes. You don’t just join an organisation and suddenly you want to head the organisation, without requisite qualification, experience and knowledge. You don’t bring a bambino to go and manage the people. I don’t want us to end up like the ANPP.
“Last year, leaders from the three zones in the South met, to analyse the situation after the position was zoned to the south. And the very able, committed, dedicated and foundation member of the party, Dr. Peter Odili, got up to say from all analysis, it was the turn of the South-west to produce the national chairman of the party. And unanimously it was adopted. So that closes the chapter. So I will advice that we don’t open a fresh wound. Let the sleeping dog lie.”
Also speaking, a former Works and Housing Minister, Adeseye Ogunlewe, said the chairman of PDP was not for politician who is still learning the rope but for those with experience.
He said among those who have shown interest in leading the party, George is the most experienced.
The chairman of Olabode George Campaign Organisation, Chief Ebenezer Babatope, called on the South-west to rally behind Geroge whom he said is the most experienced among the contestants
Source: This Day
Follow Us on Twitter!