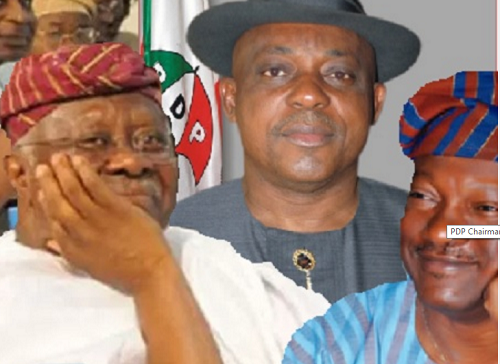 A group in the Peoples Democratic Party, PDP in South-West, the Oodua PDP Alliance, has expressed its support for Uche Secondus, saying the geopolitical zone should ask for another position because the zone was not the base of the PDP.
A former gubernatorial candidate of the PDP in Lagos State, Jimi Agbaje and Chief Olabode George are believed to be major contenders of the PDP national Chairman form the Southwest zone among others.
In a statement signed by the leader of the group, Hakeem Ogunsola, who is one of the party leaders in Osun State, the group said it would back Secondus, who served as the chairman of the PDP National Working Committee between 2015 and 2016.
Ogunsola stated, “We want to note that rebuilding the PDP and winning power back in 2019 demand a chairman with solid home base, deep experience and capacity to face the power of incumbency, we need Secondus to lead these electoral and political battles to rescue Nigeria and change the fake change.

“How can you be going for chairmanship when there are better bargains to strike? How can you hope to lead the party when your zone is not a stronghold of the PDP? We don’t want party chairman in the South-West. Let Secondus have it,” the statement read in part.
The group said that it had commenced advocacy and mobilisation for Secondus’ emergence as the PDP chairman, urging the South-West aspirants to drop their ambition and bargain for better positions in government.
Meanwhile, Chief Bode George, said on Sunday that he was in the race for the party national chairmanship to correct the impunity experienced in the past by the party.
According to Punch Newspaper, George stated this when he met members and leadership of the party in continuation of his nationwide consultation at the North-West Secretariat of the party along Issa Kaita Road in Kaduna.
George said that by the experience that he had garnered over the years, he remained the best candidate for the position.
“We operate before with impunity without recourse to the constitution of the party. This time, God willing, we will respect the constitution. Our members should rest assured that the era of impunity is over.
“Anybody who intentionally disobeys the party’s constitution should be shown the yellow card. We have to be committed and loyal to the party’s constitution,” George said
Follow Us on Twitter!