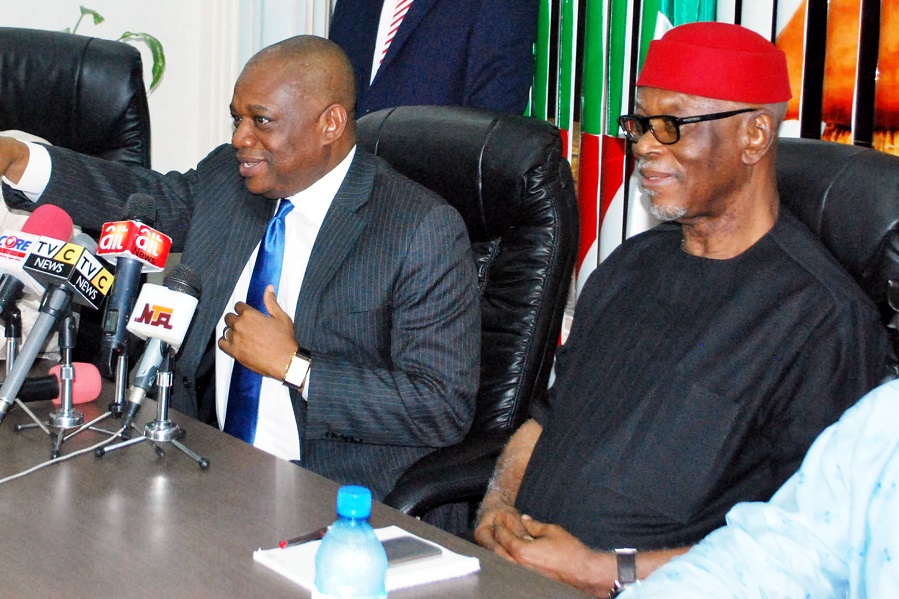 …I work for the CIA says Orji Uzor Kanu
…I can connect you to Jonathan if you drop Biafra
The recent noise over the whereabouts of the leader of the Biafra restoration movement in Nigeria and worldwide, Prince Nnamdi Kanu by the supposed revelation from a former governor of Abia State, Chief Orji Uzor Kalu who stated recently that Prince Nnamdi Kanu had escaped to London through Malaysia. The former governor also stated that members of the Indigenous People of Biafra [IPOB] had engaged in illicit acts that included robbery and rape of women in Abia State.
However information recently made available to 247ureports.com indicates that the former governor may have been angry and/or bitter with the Kanu family following a rebuff by the family when he attempted to reach out to the family to help in persuading Nnamdi Kanu into dropping the Biafra restoration project.

Specifically, Orji Uzor Kanu had visited the home of Nnamdi Kanu on December 27, 2016 to meet with Prince Nnamdi Kanu’s family on the premise that he had a message from the President of the republic of Nigeria, Major General Mohammadu Buhari.
Orji Uzor Kalu was greeted at the balcony of the house by the father and mother to Prince Nnamdi Kanu in the company of Emmanuel Kanu, the brother.

Orji Uzor Kalu proceeded to tell the parents of Nnamdi Kanu that he had the powers to revamp the family and put them on money should they help him in persuading their son to drop the Biafra restoration project. He pointed to his powers as an operative of the CIA [Central Intelligence of America] – and that he had enormous pull in African affairs. He told them that America and United Kingdom briefed him that there would not be any Biafra.
He told the family – prior to Nnamdi Kanu’s release that he will arrange for Nnamdi Kanu to meet with the former President of Nigeria, Dr. Goodluck Jonathan in Abuja – and that Jonathan is able to open up doors of economic opportunities for the entire family.
Orji Uzor Kalu was softly rebuffed and told by the brother to Prince Nnamdi Kanu that the family was not for sale nor were they in the position to compromise the struggle in exchange for money or economic opportunities. The brother told Orji Uzor Kalu that IPOB is bigger than Nnamdi Kanu or anyone in IPOB. So no one can single-handedly collect bribe to compromise the restoration project.
Four months later in April 2017, Orji Uzor Kalu placed a call to the phone belonging to Nnamdi Kanu’s brother, Emmanuel. Orji Uzor Kalu lamented bitterly that the Kanu family was not giving him the leverage he requires to negotiate with the Presidency. He told Emmanuel that he visited Nnamdi Kanu while he was at Kuje prison – and had worked towards achieving his release from prison. But after his release, Nnamdi Kanu abandoned him and decided to give glory to others and not him. He lamented bitterly that Nnamdi Kanu decided not to visit him in the same manner he visited other supposed Igbo leaders.
He was assured by Emmanuel Kanu that Nnamdi Kanu will make out time to visit him in Abuja once the schedule allows. But Nnamdi Kanu could not get around to visiting Orji Uzor Kalu before Orji Uzor Kalu lost patience with the Kanu family.
Orji Uzor Kalu then changed his tactics and immediately went public to vilifying the Kanu family and the Biafra restoration project.
Sources close to the former governor told 247ureports.com he had assured the presidency he had the magic to get the Nnamdi Kanu family to halt the Biafra restoration project. It was alleged that Orji Uzor Kalu was mobilized to the tune of N35billion to embark on the project.
“We are sure he is only trying to impress his hausa fulani masters”.  His recent pronouncement that Nnamdi Kanu had escaped to London comes out of bitterness, failure and desperation, says Emmanuel Kanu.