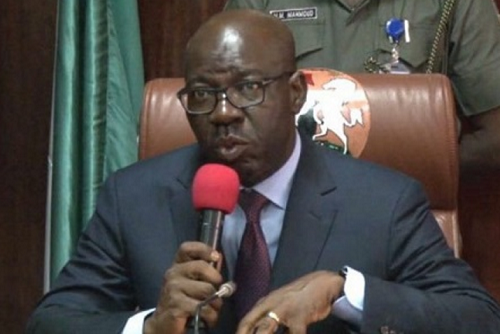 Recall that Governor Obaseki vowed to unmask the people that sent a N283 million request for the conduct of primary school examination in the state, which was eventually conducted at the cost of N30 million.
Speaking to journalists after the meeting, the Commissioner for Communication and Orientation, Rt. Hon. Paul Ohonbamu said that the Attorney General and Commissioner for Justice, Prof. Yinka Omorogbe, submitted a report on the panel of enquiry on the conduct of the 2016/2017 Primary School Leaving Certificate Examination and after due consideration of findings and recommendations, the EXCO took the decisions.
According to Ohonbamu: “EXCO also set up a committee to be chaired by the Honourable Commissioner for Employment and Wealth Creation, Hon. Emmanuel Usoh to investigate the delisting of about 350 private schools from the list of eligible schools to participate in the Primary School Leaving Certificate Examination and also the conditions that led to the relisting of these schools shortly after they were delisted.”
Other members of the committee include Ohonbamu and the Managing Director of Edo State ICT Agency, Mr. Lambert Ugorji.
Ohonbamu further said that the EXCO meeting ordered that an audit exercise be carried out on the accounts that pertain to the examination exercise, which has now been marred by alleged corruption. This audit will cover 2014, 2015 and 2016.
Follow Us on Twitter!