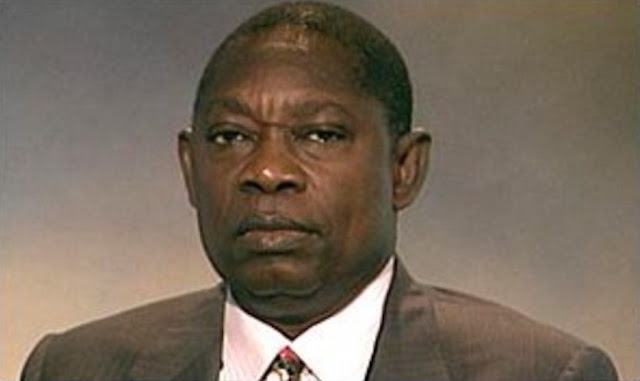 Facts and revelations have emerged about how the leaders of Nigeria's pro-democracy group, the National Democratic Coalition, (NADECO) misled late MKO Abiola that led to his death while in detention to claim his mandate.
It is about 19 years now since the 1993 presidential election generally believed to have been won by him was annulled by the military government of General Ibrahim Babangida.
This revelation was made by the former National Vice Chairman of the Peoples' Democratic Party, Chief Ishiola Filani in an interview with Saturday Sun.
Chief Filani alleged refuted the claims that NADECO stood by Abiola while fighting to reclaim his mandate after the series of events that led to his arrest and detention at the period under sad review.
He accused NADECO leaders of sabotaging the struggle to revalidate June 12 majority of the members, he said, being Awolowo loyalist worked against Abiola by misleading him to make the ill-fated Epetedo Declaration that led to his arrest and detention and also misled Abiola into rejecting the conditional bail granted him by the Abacha military government.
Excerpt:
Are you now saying that M.K.O Abiola and the June 12 crisis could have been resolved or well managed if NADECO had not joined the fray?

Yes… NADECO scattered June 12 struggle. NADECO did a lot of damage to the June 12 crisis. At a point, they turned the June 12 struggle into a Yoruba affair. The question we were asking them was this, are the Yoruba the only ones who voted for Abiola? NADECO turned it into a sectional issue. Perhaps, M.K.O Abiola would have been alive today if not for NADECO leaders’ antagonistic posture concerning the June 12 struggle. They pretended to be working for Abiola, but their activities and actions were inimical to Abiola’s interests.
There is a difference between fighting a war and making a political negotiation over an issue. Abiola was in captivity, he should have been allowed to regain his freedom first, these NADECO people should have allowed him to get out of captivity first, but they didn’t. They advised him not to take the conditional bail. Does a man that is in captivity have any advantage over those who held him? No. This is why he should have been allowed to come out of detention first before any other thing followed.

Each bail had conditions, so attaching conditions or granting conditional bail to Abiola was not even an issue, it was his freedom first, that mattered. Even if Abiola had been allowed to take that conditional bail, coming out of detention, he would have challenged the bail conditions. It should have been Abiola’s freedom first and that was our concern in SDP. Let Abiola come out first, and any other thing can follow.
At a point, NADECO leaders now turned those of us in SDP and who are genuinely committed to resolving the June 12 issue against him. They were feeding Abiola with falsehood against us. They were telling him that those of us in SDP were against him, that we didn’t want him to become president. NADECO did a lot of incalculable damage to June 12 struggle and Abiola’s interests. It is monumental. But for NADECO, Abiola would still have been alive today.
Follow Us on Twitter!