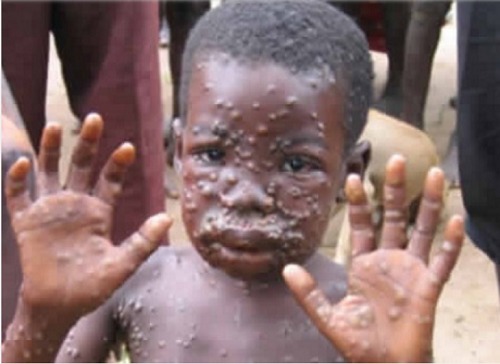 If you have been watching the news or reading online lately, you’d have heard of a disease outbreak in Bayelsa called “Monkeypox”.
You might be quite familiar with a similarly named disease- chickenpox, and perhaps smallpox.
“Monkeypox, however, must sound quite strange to you.
Here are 5 facts about Monkeypox you should know:
#1: It can affect humans.
Even though it is named after monkeys, it can affect humans. The reason behind its name is that it was discovered among monkeys in Denmark in 1958.
In 1970, it was first reported among humans when a 9 year old boy in the Democratic Republic of Congo was found to have contracted the disease.
#2: It is caused by a virus that can be deadly.
Monkeypox is a disease caused by a viral infection. The monkeypox virus is in the same genus as smallpox and cowpox.
The virus can cause an illness in humans that can be fatal.
Monkeypox causes death in less than 10% of people that are infected with it. If you were wondering why I used “less” in my last statement, let’s compare this mortality rate with that of smallpox or ebola virus.
Although smallpox has been eradicated from nature, its common form killed about 30% of people infected. Also, it caused facial scars on upto 80% of people who had it.
Ebola virus, is several times more deadly than monkeypox. The last outbreak in West Africa killed more than 50% of people who got infected.
Monkeypox can lead to death in humans but has a far lower mortality rate than smallpox and ebola.
#3. It starts with a fever.
Now, don’t panic. Not all fevers in Bayelsa state are monkeypox, malaria is still the most common cause of fevers in Nigeria.
However, 7-14 days after a person is infected with monkeypox, the person would start showing signs and symptoms.
Some signs and symptoms of monkeypox are:
Fever
Headache
Muscle pain
Back pain
Enlargement of lymph nodes
Body weakness
1-3 days after the fever starts, a rash develops. The rash is known to start from the face, and then spreads to other parts of the body.
The illness usually lasts about 2-4 weeks.
The symptoms are quite similar to smallpox. One difference though, is that monkeypox has significant enlargement of lymph nodes, while smallpox doesn’t have that as a characteristic feature.
Lymph nodes are small bean-shaped structures that make up an important part of the immune system.

#4. It can be gotten from rodents.
Apart from monkeys, the monkeypox virus has been isolated in rodents like rats and squirrels.
The primary method by which human outbreaks start, is when a person comes in close contact with an infected animal.
In rural areas, infected rodents can be hunted and then eaten, hence, increasing the likelihood of a human outbreak, especially if the meat isn’t thoroughly cooked.
It can also be spread from person-to-person. How? By close contact with an infected person.
Close contact with respiratory secretions like sneeze and cough droplets, can lead to the spread of the monkeypox virus.
Also, contact with an infected person’s blood, body fluids, rash and clothing can spread the virus.
This is why it is important for infected people to be identified and quarantined. In the current outbreak in Bayelsa, a medical doctor and some others have been quarantined and kept in isolation wards to prevent the spread of the disease.
#5. It can be prevented.
This is the good news. Monkeypox can be prevented.
At the moment, there is no specific treatment or vaccine available for this disease, however, you can protect yourself from getting infected by following these:
Avoid close contact with infected persons or animals.
Ensure you cook meat thoroughly.
Practice hand washing optimally
Health workers should use gloves and personal protective equipment.
Conclusion:
The current outbreak of Monkeypox in Bayelsa is not something you should panic about. However, you should ensure you follow the necessary preventive measures and you should be fine.
Dr Chales-Davis is a medical practitioner and founder of 25 doctors, a platform where you can get health information and chat with doctors online
Culled From The Nation