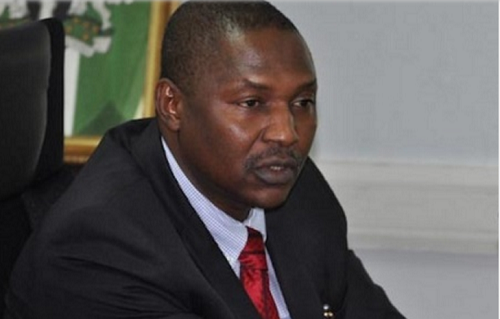 The Senate’s decision to investigate the surreptitious reinstatement of former chairman of the Presidential Task Team on Pension Reforms, Abdulrasheed Maina, into the civil service as an acting director has put the Attorney General of the Federation and Justice Minister, Mallam Abubakar Malami, on the defensive.
As Sunday Sun gathered, no fewer than 20 senators who have at one time or the other had a taste of Malami’s profane use of power are now warming up to take their own pound of the flesh. This is in addition to the long list of other alleged ‘sin’ the embattled AGF was said to have earlier committed against the red chamber. Malami is one of the three key actors allegedly believed to have masterminded the re-admittance of Maina into the interior ministry. He was said to have acted in concert with Minister of Interior, Abdulrahman Dambazau and Head of Service of the Federation, Mrs. Winifred Oyo-Ita to carry out the deal. If the lawmakers make good their threat, then Malami may be going home to roast in the event that the committee resolves to invite him into the red chamber to explain his role in the whole saga.

In less than two years, Malami has offended over 20 senators and also allegedly made disparaging statements against the ‘revered’ chamber.
Following the public outcry that greeted Maina’s recall, the Senate had last week constituted an adhoc committee headed by Senator Emmanuel Paulker, the Chairman, Senate Committee on Public Service and Establishment to investigate into the matter. The Senate President, Bukola Saraki, while charging the committee said: “We are all very disturbed. I want the committee to work hard and bring this matter back to us. We need to investigate the bridge in our security and how the anti-corruption war is going”.
Now is the time for the lawmakers to make Malami pay for his alleged ‘sin’. Like the case of the suspended SGF, the committee may end up submitting a damning report to President Buhari and then push for his removal. Since last week, the Buhari administration has been under fire for what many have described the biggest scandals of the moment. While Oyo-Ita and Dambazau have officially revealed the role they played in the unfolding drama, Malami on the other hand is keeping a loud silence, even as official memos released showed that the AGF was the one who allegedly gave the nod to the Head of Service to reinstate Maina.
The details of who authorised Maina’s recall were contained in a letter of reinstatement sent to the Federal Civil Service Commission (FCSC). According to the letter dated September 18 and signed by Mustapha L. Sulaiman for the FCSC chairman, advice to reinstate Maina actually emanated from the office of the AGF. Malami has, however, clarified his action, saying it was “guided by public interest”.  His words: “I am a legal practitioner, who is always guided by law and public interest and will therefore not do anything that deviates from the law or breaches public interest.”
“I believe that Nigerians are entitled to know the truth in the entire saga and I am ready to speak directly to them when I appear before the Senate since I have been summoned by the legislature, which is investigating the matter.
“I will not however talk until I get clearance from my principal on the matter and I look forward to addressing anxious Nigerians on the matter when I appear before the senators.”
President Buhari, Sunday Sun learnt, is still reviewing a report submitted to him by the Head of Service. The fate of the embattled AGF is now hanging in the balance. While the President is yet to make any official statement on the report, the lawmakers are up in arm to subdue Malami.

There are 108 senators in the upper legislative chamber of the National Assembly. Anambra Central Senatorial District does not have a representative for now. If the lawmakers are to cast secret ballots on Malami’s case, majority is likely to vote against him. Since his appointment as AGF, Malami has always been involved in one controversy or the other with the senate. With his current travails, Malami may be treading the same path with the suspended Secretary to the Government of the Federation (SGF), Mr David Babachir Lawal. Malami’s sins against the Senate since the inauguration of the 8th National Assembly on June 9, 2015 are enormous.
Top on the list is his role in the trial of Saraki in the controversial false assets declaration. In September 2015, two months before Malami was appointed AGF and Minister of Justice, the Federal Government had filed a 13-count charge against the Senate President, Bukola Saraki.
In the 13-count charge of false assets declaration, the Code of Conduct Bureau (CCB) had alleged that Saraki made false claims in the four assets declarations forms he submitted on his assumption and exit from office at different times between 2003 and 2011. Saraki held sway as governor of Kwara State within this period.
While the trial lasted, Malami, who formed part of the prosecution team, technically shutdown the Senate. Yet, on several occasions, he refused to honour invitations extended to him by the Senate committee on Judiciary, Human Rights and Legal Matters. When he eventually appeared before the committee reluctantly, he refused to respond to questions posed to him. From the exchange of unfriendly banters, it was clear that Malami had issues to settle with the Senate.
While Saraki was still battling with the CCT trial, on June 2016,  Malami again dragged Saraki and his deputy, Ike Ekweremadu to the Federal Capital Territory (FCT) High Court, over an alleged forgery of the Senate Standing Rules in 2015. The duo were docked and eventually granted bail.
Similarly, when the suspended SGF defied the Senate and refused to honour its summons, he had a dependable ally in Malami. Pundits then described the scenario as a case of the voice of Jacob and the hand of Esau.
In early 2017, when the Comptroller-General of Nigerian Customs Service, Hameed Ali, had a running battle with the Senate, Malami equally stepped into the ring to play the role of an umpire. His intervention didn’t augur well with the Senate. Malami, taking sides with the Customs boss, had then written a letter to Saraki, explaining why Ali would not appear before the lawmakers. Senators were infuriated. Again, Malami won the contest and the rest of the world went to sleep.
Malami did not stop there. He went further to launch an onslaught against other senators. One of these is Senator Albert Bassey Akpan. Malami was said to have allegedly taken side with Bassey Etim to remove Akpan from the Senate. Therefore, For Akpan, the AGF’s sin is unforgivable and unforgettable.
Senator Attai Aidoko from Kogi State is also not exempted from Malami’s undue intervention. According to the senator, Malami made several attempts to invalidate his election into the Senate. The lawmaker believes that the AGF has a grand plan to frustrate them out of office.
There are about 21 former governors and deputies, who are either facing corruption charges or currently being investigated. The AGF had recently requested for the list of high profile corruption cases from the Economic and Financial Crimes Commission (EFCC). Names of these former governors and deputies, who are now senators, are on that list. They may be dragged to court soon.
Senator Isah Hamman Misau from Bauchi State has also had a taste of Malami’s show of power. Since August, Misau has been at loggerheads with the Inspector-General of Police, Ibrahim Idris. The senator had made some earth-shaking allegations against the police boss.  While Nigerians were waiting for President Buhari to act on the allegations raised, the AGF took up the matter and dragged Misau to court and filed two separate charges against the senator.
Among the allegations by Misau which government considered as injurious to the IGP and the NPF is the claim that police officers allegedly paid as much as N2.5 million to get special promotion and posting through the Police Service Commission.
This is in addition to the lawmaker’s claim of alleged diversion of money meant for the purchase of Armoured Personnel Carriers, Sport Utility Vehicles and other exotic cars as well as IGP’s posting of almost half of his Nupe people as mobile commanders in the country.
For the disparaging statements made against the ‘revered’ chamber, it will be easier for the proverbial camel to pass through the hole of a needle than for Malami to escape the hammer of the Senate. “If you are in the shoes of senators, what would you do? Look the other way or take your pound of flesh when a fertile opportunity pops up? I think a sane person will take his pound of flesh,” a public affairs analyst, jokingly noted.
There may be merits in the proposed probe of the AGF by the Senate to ascertain the role played by the AGF in the reinstatement of Maina. The chances are there that the lawmakers may seize the moment to rubbish Malami as a payback for his alleged ‘sin’.
Follow Us on Twitter!