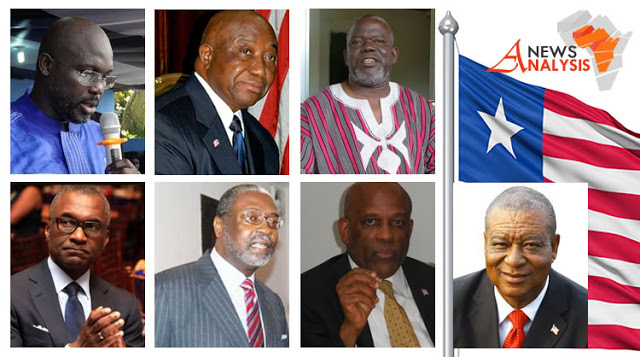 Liberians go to the polls on Tuesday to elect a new president after 12 years under Africa’s first elected female leader, Ellen Johnson Sirleaf.
Here are five points that have defined the campaign:
– Sirleaf steps aside –
Sirleaf unexpectedly swept the vote in 2005 and was re-elected in 2011, and is widely commended for maintaining peace following horrific back-to-back civil wars (1989-2003) which killed an estimated quarter of a million people.
Sirleaf’s legacy matters both for the symbolism of her victory and because her vice president for both terms, Joseph Boakai, is a front-runner this year. He will be judged on his record in her government.
Critics accuse Sirleaf, a Nobel Peace Prize winner, of failing to improve ordinary Liberians’ lives and being overly preoccupied with her image abroad in a nation heavily dependent on foreign aid to provide basic services. Boakai is both campaigning on his record and promising an alternative vision.
– 20 candidates –
Beyond Boakai, Liberians have a diverse choice between George Weah, a footballing icon; two prominent businessmen, Alexander Cummings and Benoni Urey; former central bank governor Mills Jones; or veteran opposition figure Charles Brumskine.
There are some familiar faces from Liberia’s bloody past: Weah’s running mate Jewel Howard-Taylor is the ex-wife of former dictator Charles Taylor, while warlord-turned-evangelical preacher Prince Johnson is running for president for the second time.

There is a glaring lack in just one area: after two terms of a female president, just one woman is aiming for the top job — fashion model-turned-humanitarian MacDella Cooper.
– Security fears –
The United Nations handed responsibility for national security back to the Liberian security forces last year after more than a decade of efforts to depoliticise and professionalise the police and army following the civil war period.
Providing a safe and secure election environment will be the first big test for the newly empowered Liberian security forces, who remain under-equipped and underfunded, the UN says.

Olof Skoog, chair of the UN’s Peacebuilding Commission for Liberia, told the Security Council in June that there were “real hurdles ahead” following the security transition.
Skoog cited “issues pertaining to land use, decentralisation, access to justice, and violence against women” as the key flashpoints in Liberian society beyond the election period.
– A question of economy –
Every candidate has asserted they have the magic formula to turn around Liberia’s stuttering economy, which remains stubbornly reliant on foreign assistance despite significant endowments of iron ore, rubber and palm oil.
Boakai has campaigned on “roads, roads, roads”, blaming the dire state of Liberia’s transport network for a lack of development, while telecoms tycoon Benoni Urey has said agriculture must be developed to end a dependence on foreign aid.
The biggest shock to the economy during Sirleaf’s tenure was the Ebola crisis that hit in 2014, virtually shutting down businesses, compounded by the collapse in commodity prices.
However, the African Development Bank said in a May briefing that investment in electricity provision under Sirleaf “should begin to gradually alleviate a significant constraint to the business environment”.
– First-time voters –
Just over a fifth of the 2.1 million people registered for this election are aged 18 to 22, according to official figures.
Attracting enough of the youth electorate could sway a candidate’s entry into the runoff election that will be called if no single candidate gains more than 50 percent of the vote.
In such a crowded field without a clear frontrunner, a runoff looks highly likely, experts say.
Young voters are concerned with unemployment and the state of the nation’s higher education system, several candidates have said, with soft drinks millionaire candidate Alexander Cummings promising to overhaul vocational education.
Weah, a symbol of Liberian grit and talent on the football field, remains a revered figure among the nation’s young people, and has also put education and job creation at the centre of his platform. (AFP)
Follow Us on Twitter!