Home » news » Lawyers calls for the arrest of Senator Akpan

Lawyers calls for the arrest of Senator Akpan 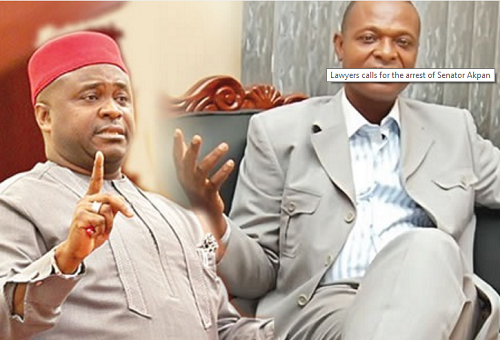 Disturbed by an alleged orchestrated  attempt by Senator Bassey Albert Akpan to assassinate Barrister Ochai Jacob Otokpa in his office, a coalition of Human Rights Lawyers and Civil Society group has called on the Inspector General of Police to immediately effect the arrest of the lawmaker.
Human Rights Lawyers and Civil Society Alliance for Justice in Politics, through its Deputy chairman,  Barrister Lawrence Ojo Gabriel, who stated this in a statement issued yesterday lamented that since Barrister Jacob Otokpa carried out an assignment given to him by his principal,the National Legal Adviser of the People's Democratic Party( PDP), Rt.Hon. Dave Iorhemba to serve a notice of withdrawal of an earlier Appeal file by the party against Hon Bassey Etim and 2, others in Calabar,his life has been under serious threat by the Senator.
He said:"We are asking the Inspector General of Police to order immediate arrest of Senator Bassey Albert Akpan  for invading  the office of the National Legal Adviser of the People's Democratic Party ( PDP) Secretariat located at Wadata House Wuse  zone five Abuja, for assaulting and threatening  to kill Barr. Otokpa for carrying out a lawful instruction given to him by the party's legal Adviser.
"The lawmaker's arrest should be effected because a lawyer should be guided  by the ethics of his profession. A lawyer was duely briefed to go and filed a notice of discontinuance of a case in the court of Appeal in Calabar and an affidavit copiously disposed by a staff of the party stating the reasons for the party's withdrawals based on the fact that the judgement does not attack the interest of the party which is 100% right."
He wondered what legal right the lawmaker has to go and attack a lawyer doing his legitimate assignment "even when he,Albert has been sacked by the judgement of a Federal High Court of competent jurisdiction and an court of Appeal and yet he still sits comfortably in the senate under the protection of the Senate President, Bukola Saraki for months now."
"The question is this, is Albert above the law? He is not, it is just that the system has bee compromised otherwise what is the basis for Albert to remain in the Senate up to date when the certificate of Return has been withdrawn from him by the Independent National Electoral Commission ( INEC)," he noted.

Meanwhile in a Petition letter by the solicitors of Barr.Ochai Jacob Otokpa to the Inspector General of Police dated sept.25,2017 and acknowledged by his office on Sept. 28,2017, singed by Barr. G. E. Ejekela Esq. and made available to The Authority, tagged " Case of unlawful Restraint, Assault, Threat to life and criminal intimidation against Senator Bassey Albert Akpan," the lawyers appealed to the IGP to carry out an in-depth  investigation into the alleged plot to assassinate their client.
The petition which was copied to the President of the Senate, Abubakar Bukola Saraki and Commandant General of Nigerian Security and Civil Defence Corps, alleged that the life of Barr. Otokpa has been under serious threat on account of the lawmaker's reprehensive conduct.
According to the solicitors to Barr. Otokpa, their client acting on the instruction of his principal, the National Legal Adviser of PDP Rt.Hon. Iorhemba to go to Appeal Court in Calabar to withdraw the party's Appeal No: CAC/C/104/2017 titled "People Democratic Party Vs Hon Bassey Etim & 2 Others that was predicated on the ground that issues leading to the suit were intr-party affairs and that it was inappropriate for the party to display partisanship by appealing court decision on the election dispute between its members.
The group noted that according their brief by their client Senator Akpan had on Sept. 19,2017 at about 4pm invaded the office of the party's legal Adviser with thugs numbering between four to six in an attempt to injure or assassinate their client.
" It is our  client brief  that Senator Bassey Albert Akpan entered the inner office of the National Legal Adviser and our client was called to come in and when he our client entered, Senator Akpan asked our client if he is Barr" Ochai and our client answered in affirmative. Immediately, Sen.. Akpan took his picture with his phone, locked the door, out the key in his pocket and started assaulting our client and threatening to kill him for carrying out the lawful instruction given to by his principal to file notice of withdrawal of the party's Appeal against Hon Etim," the Solicitors added.