Home » opinion » Lauretta Onochie: There Must Be Something About The First Lady That Attracts EFCC To Her.

Lauretta Onochie: There Must Be Something About The First Lady That Attracts EFCC To Her. 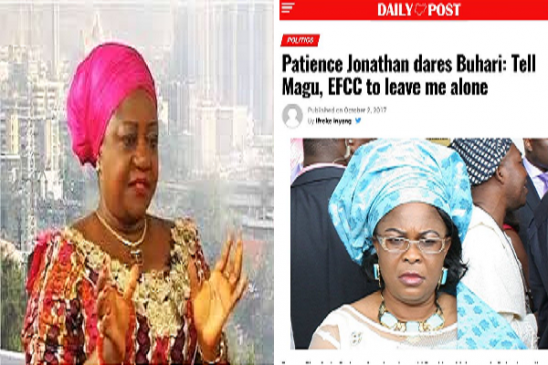 Lauretta Onochie, personal assistant to the president on Social Media, has reacted to claims by Dame Patience Jonathan that she is being witch-hunted by the acting chairman of the Economic and Financial Crimes (EFCC), Ibrahim Magu.
The former first lady had earlier petitioned President Buhari asking him to call Ibrahim Magu to order.
Patience also accused Magu of bias, and intimidation and lamented that the EFCC boss had been spreading falsehood and propaganda against her in the name of investigations.
Onochie, however, reacted to the claims by the former first lady, said there must be something about Patience Jonathan that attracts the anti-graft commission to her.


The presidential aide in a statement on Twitter on Tuesday, October 3, noted that the EFCC was only attracted to those who have stolen items.
Meanwhile, the Inter-Governmental Action against Money Laundering in West Africa has pledged support for efforts by the EFCC and the Nigerian government to ensure the lifting of the suspension of the Nigerian Financial Intelligence Unit (NFIU) from the Egmont Group in the shortest time possible.
The director-general of GIABA, Adama Coulibaly, made the pledge on Wednesday, September 27 when he lead a delegation on a courtesy visit to the acting chairman of the EFCC, Ibrahim Magu, at the commission’s headquarters in Abuja.
While commending the EFCC for championing the anti-corruption crusade in Nigeria, Coulibaly said that the agency’s achievements were not only for the country, but for the African continent.
The EFCC stage a walk against corruption on NAN.