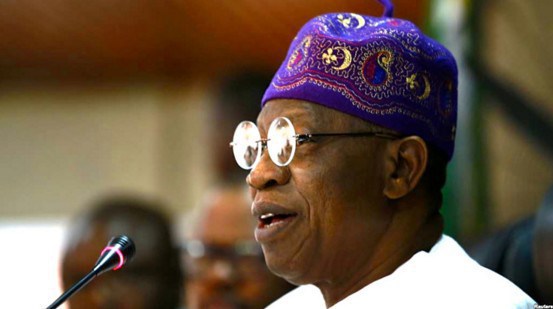 The Minister of Information and Culture, Lai Mohammed, has called on Nigerians not to blame President Muhammadu Buhari for his incapability to fix the infrastructural deficit in the country.

The Minister made this disclosure when he featured alongside other guests on the Nigeria Television Authority, NTA, programme; “Good Morning Nigeria”, which focused on Nigeria at 57.

Lai Mohammed said that the administration was investing massively on roads, power, housing, railway, and other critical infrastructure, not leaving out the social well-being of the citizens.
“If you look at what the government inherited and where we are today, it is clear that the government has remained focused, and the solutions proferred to our challenges are working.

Do you need a reliable Handyman like a Painter, Plumber, Generator Technician, Tiler, Cleaner, Roof Technician, and much more…. Click here to get the best and most reliable services, using your mobile device with very less stress and no disappointment at all!!!
“When we came in, the economy was over-dependent on oil, and today the recovery is being driven by agriculture, mining creative industry, and manufacturing, which means our diversification programme is working.

“It has never happened in the history of the country that a government will spend N1.2 trillion in capital expenditure like the administration did, and we are seeing the positive results have helped us to get out of recession”, he said
The Minister further explained that: “In 2015, the past administration spent only N18 billion on roads, but in 2016/2017 circle this government spent N260 billion on roads and bridges.


The Minister said that many contractors had been recalled to the roads projects they abandoned during the previous administration, resulting in creating of over 17,000 direct jobs and 15,000 indirect jobs from roads.

On power, the Minister said that when the administration came in May 2015, only 2,690 megawatts was generated, but today the country is generating over 7,000 megawatts.

He said inflation had been coming down, and the government had revived 12 fertiliser blending companies to boost agriculture.

He urged Nigerians to judge the administration in a contest of what it inherited from previous administration, and where the country is today.

On the clamour for restructuring, the Minister said that the issue has many sides, and the focal point must be Constitution amendment through the National Assembly.
“Restructuring means different things to different people, and that is why we have the debate that is going on now to collate the various ideas of Nigerians as to what restructuring means, in order to know what exactly to do.

“To some, restructuring means going back to the former three of four regions, to some it means creation of additional States, as was proposed in the 2014 Confab

“Let us collate and aggregate what Nigerians mean by restructuring, and of course we still need to go back to National Assembly, if we want to effect any change in the Constitution”, he said.
Follow Us on Twitter!