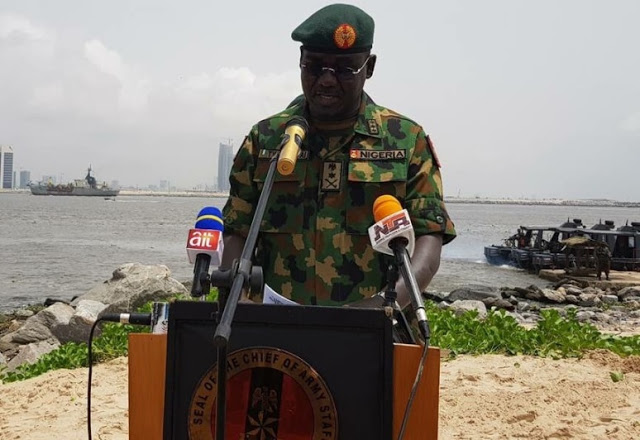 The Nigerian Army has over the weekend, cautioned sea pirates, kidnappers and crude oil thieves to evacuate from the Niger Delta region, as the military would maintain its presence in the environment despite the official end of the Operation Crocodile Smile exercise.
The admonition was given by the Chief of Army, Lt- Gen Tukur Yusuf Buratai, while addressing to officers and men of the 16 Brigade in Yenagoa, Bayelsa State.
Buratai directed the soldiers to continue to control its Area of Responsibility in its drive to curb crime in Bayelsa state and other parts of the Niger Delta region.
Represented by the General Officer Commanding 6 Division, Maj.-Gen. Enobong Okon Udoh, at the unveiling of the rehabilitated Oloibiri Oil Well to mark the end of Operation CROCODILE SMILE II, Buratai enjoined the Commander, 16 Brigade, Brig.-Gen. Kevin Aligbe to ensure constant patrol and security surveillance to checkmate the activities of criminals along waterways.

He applauded Aligbe for undertaking the rehabilitation of the Oloibiri which he said is an iconic historical monument that would attract potential tourists to Bayelsa state.
Commending the 16 Brigade troops, Buratai said the command’s achievement is an aspect of the Civil-military relations which formed part of the activities scheduled in the Operation Crocodile Smile 11 in the Niger Delta region.
The Army boss said, “As you know we are gathered to witness one of the civil military relations activities of 16 Brigade, Nigerian Army which is part of Operation Crocodile Smile 11.
“The Nigerian Army in consonance with the vision of the Chief of Army staff to have a professionally responsive Nigerian Army, in the discharge of its constitutional roles continue to conduct operations and training exercises of course in order to position itself to be able to respond to threats that we have in the country.

“The threats are so many, cattle rustling, kidnapping, cultism, militancy and in the Niger Delta we have illegal oil bunkering, pipeline vandalism, crude oil theft etc.
“So, Nigerian Army would continue to conduct these operations to combat these threat, so that we can have a conducive environment for business activities to take place and for law abiding citizens to go about their lawful duties without let or hindrance.
Buratai directed that the officers move closer and interact with members of the publicin order to ensure good rapport as the military belong to the people.
During such operation Nigerian Army go closer to the people because of course in the first place we belong to the people. We belong to Nigerians as an Army that is why it is called Nigerian Army. I want to use this opportunity to congratulate the Commander of the 16 Brigade and commend him for this initiative in rehabilitating this place.
“I also want to use this opportunity to urge him to continue to dominate this area in terms of patrol and security so that the bad boys and criminals can be kept away from here.”
Follow Us on Twitter!