Home » opinion » Its A Pity That Osinbajo Has Sold His Soul to Devil for Power and Fame,He Now lies More Than the Devil Himself -Jonathan

Its A Pity That Osinbajo Has Sold His Soul to Devil for Power and Fame,He Now lies More Than the Devil Himself -Jonathan 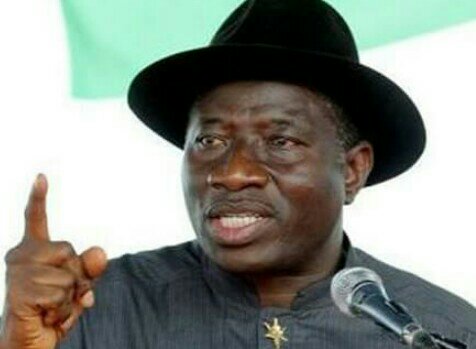 FORMER President Goodluck Jonathan has said Vice-President Yemi Osinbajo, lied against his government by claiming that the last administration released the sum of N100 billion and another $295 million in cash within two weeks of the 2015 general election.
Jonathan, in a statement on his behalf by his Special Assistant, New Media, RenoOmokri indicated that the lies by the vice President were becoming characteristic.
The statement indicated that the claims credited to Osinbajo, while speaking in Lagos on Friday, at a “Greater Nigeria Pastors Conference,” that President Jonathan released the huge sums weeks before the election, was false.
“I make bold to say that the Vice President has once again taken to his characteristic habit of lying,” the statement read.
“Nigerians may recall that only last week, Vice President Osinbajo was in Anambra State, where he lied that the present administration had paid $2 billion for the second Niger Bridge.
“I had cause to expose that lie and forced the Presidency to issue a ‘clarification’. The money released was 2 billion Naira and it came from the Sovereign Wealth Fund set up by the Jonathan administration which the APC resisted and challenged in court.
“It will also be recalled that in February 2016, the Vice President again lied when he claimed that both the Jonathan and Yar’Adua government did not build a single road. This fact was easily disproved when even members of this administration, including Osinbajo’s boss, President Buhari, began commissioning projects, including roads built by the Jonathan administration.


“Nigerians will recall that the Jonathan administration rebuilt the Benin-Ore portions of the Benin-Lagos road,” Vom-Manchok road, the Kano-Zaria Road Bridge (named after late Emir Ado Bayero) and many more.
“On this recent allegation by the Vice-President, not only has the Vice President again lied, he is doing so to divert attention from the Maina scandal in which the administration in which he serves, by the testimony of the Maina family, invited Abdulrasheed Maina, the infamous alleged pension thief, back into the country, reinstated him, promoted him and deployed him as Director of Human Resources in the ministry of Internal affairs.
“When they were found out, the Presidency resorted to its favourite past time of blame game by preposterously accusing former President Jonathan of somehow magically being the brain behind Maina’s return. This is even as the Attorney General of the Federation, Abubakar Malami, had already revealed that he “acted in the public’s interest” in initiating the process for Maina’s return.”
“There is also the $25 billion Nigerian National Petroleum Corporation scam which is the biggest scam ever in the history of Nigeria since 1914 to date.
“Finally, Nigerians want to know the truth about the Babachir Lawal probe which has been concluded and handed over to the president many months ago but of which no action has been taken.
“Nigerians want to hear the truth about these scandals and not tired lies about looted funds that keep being recycled without proof.
“I would like to remind the Vice President that he is a Pastor and therefore conversant with the biblical admonition in Revelations 21:8 that “all liars, shall have their part in the lake which burneth with fire and brimstone.”
The statement further indicated: “It is not too late for the Vice President to turn a new leaf and begin to apologize to Nigerians for the three million jobs a year he and his boss promised, but ended up losing 4.5 million jobs in their first two years according to the Nigerian Bureau of statistics.
“If Vice President Osinbajo is looking for who to blame for the present sorry state of the Nigerian economy, he should buy a mirror.
“The rushed implementation of the Treasury Single Account policy of the Jonathan administration, the constant negative comments about our economy by the President while on foreign trips, the inconsistent foreign exchange policies of the government, the advice to the World Bank to focus only on Northern Nigeria, the openly pro Northern Agenda which gives promotion and appointments to persons of Northern extraction irrespective of merit or experience are to blame, not Dr. Goodluck Jonathan.”
Follow Us on Twitter!