Home » opinion » ‘I’ll be in the Senate for life ‘ – 3-time governor of Yobe State, Senator Ibrahim

‘I’ll be in the Senate for life ‘ – 3-time governor of Yobe State, Senator Ibrahim 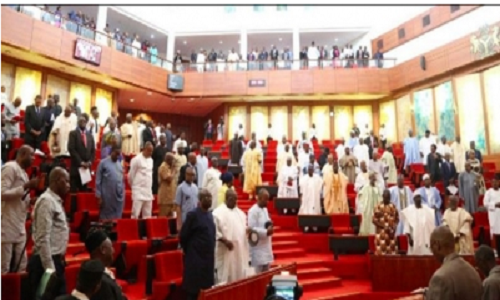 Chairman of the Senate Committee on Ecology and Climate Change and three time Governor of Yobe State, Senator Bukar Abba Ibrahim, yesterday declared that he will be in the Senate for life. Though it is not clear who the Nigerian Senator representing APC, Yobe East, who was elected Senator in 2007, re-elected in 2011 and for the third time in 2015, was sending the message to, but it was gathered that 68-year-old Bukar is from the same senatorial district as incumbent governor of the state, Ibrahim Geidam, who is also rounding up his tenure as governor.

DailyTrust reports that his wife, Khadija Bukar Ibrahim, was at the House of Representatives also for the third time until Pres. Buhari made her Minister of State for Foreign Affairs in 2015. “We are very grateful to God and to all Nigerians. Let me categorically say, Mr. Senate President, that I will stay in the Senate until death do us part. Everybody tells me that I’m Senator for life. I’m going to be in the Senate for life,” he said.
Follow Us on Twitter!