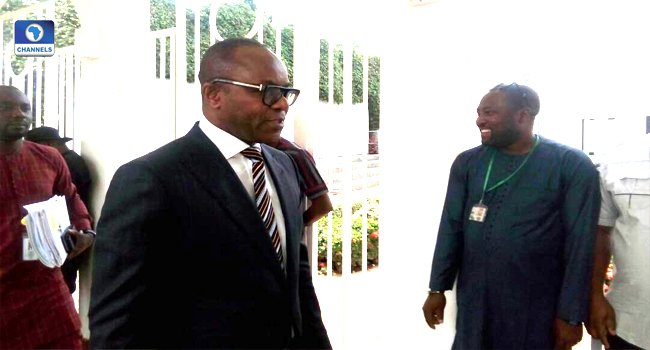 The junior Minister for Petroleum Resources, Dr. Ibe Kachikwu wore a grim look and left Aso Rock speechless after his meeting with President Muhammadu Buhari on Friday.
Elombah.com had earlier reported that Kachikwu was in a meeting President Buhari in Aso Rock, Abuja.
Kachikwu had arrived at the Presidential Villa around 11:33 am and the meeting between the President and the Minister lasted for about an hour and 20 minutes.
As newsmen gathered for media briefing following the meeting, Kachikwu declined to make any comment while wearing a somewhat forlorn look.
Recall that Kachikwu had raised dust concerning salient issues affecting the Board of the Nigeria National Petroleum Corporation (NNPC) which he chairs accusing the Group Managing Director, Maikanti Baru of insubordination.
The Minister also expressed sadness over recent changes in the NNPC and accused Baru of humiliating him and the board.
Earlier, NNPC announced a massive shakeup which affected 55 management staff without the Board’s input.
Kachikwu said it wasn’t the first time such changes would be made without consultation and due process.
“After one year of tolerating these disrespectful and humiliating conducts by the GMD,” Kachikwu lamented in the letter, he decided to bring these to the attention of the president.
He had asked the President to intervene and “save the office of the Minister of State from further humiliation and disrespect by compelling all parastatals to submit to oversight regulatory mandate and proper supervision,” he stressed.
-----

The junior Minister for Petroleum Resources, Dr. Ibe Kachikwu is currently in a meeting President Muhammadu Buhari in Aso Rock, Abuja.
Elombah.com will publish details of their meeting as soon as they are made available...
Follow Us on Twitter!