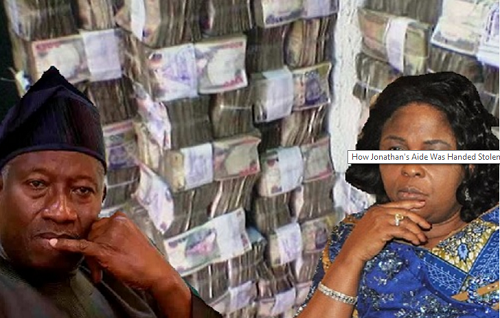 A prosecution witness, Orji Chukwuma, in the ongoing trial of a former Special Assistant on Domestic Affairs to former President Goodluck Jonathan, Waripamo-Owei Dudafa, has told Justice Mohammed Idris of the Federal High Court, Ikoyi, Lagos, how Mr. Dudafa allegedly laundered several billions of Naira for a former First Lady, Patience Jonathan.
Dudafa is standing trial alongside Joseph Iwuejo, his ex-account officer, who allegedly aided him to perpetrate the fraud.
Messrs. Dudafa and Iwuejo, who also claimed to be ‘Taiwo Ebenezer’ and ‘Olugbenga Isaiah’, between June 2013 and June 2015, were alleged to have used different companies to fraudulently launder various sums of money to the tune of N5.1 billion.
On Tuesday, Chukwuma, an investigator with the Economic and Financial Crimes Commission, EFCC, told the court how one Murtala Abubakar, a Bereau de Change operator, admitted to have collected several millions in dollars from Dudafa.
“We discovered, in the course of our investigation, that Abubakar was directed to pay the various sums of money into different accounts provided by Dudafa,” Chukwuma said.

The prosecution witness further stated that the defendant did not declare his interest in these companies in his Asset Declaration Form, and that the monies found in his accounts at two new generation banks were proceeds of crime.
Dudafa, through his lawyer, filed an application urging the court to release his international passport temporarily to enable him go for a medical appointment outside the country.
In his response, the prosecution counsel, Oyedepo urged the court not to grant the application on the grounds that the EFCC had written to a Lagos State government hospital to examine Dudafa’s health and to determine whether he could be treated in the country or abroad.
Oyedepo, however, told the court that he was yet to receive any response from the hospital.
Justice Idris adjourned to October 24 for hearing of the application and November 14 and 15, 2017 for continuation of trial.
Follow Us on Twitter!