GAMBIA: Outrage, shock over alleged plans by Adama Barrow to transform self to dictator, launches major crackdown on army officers 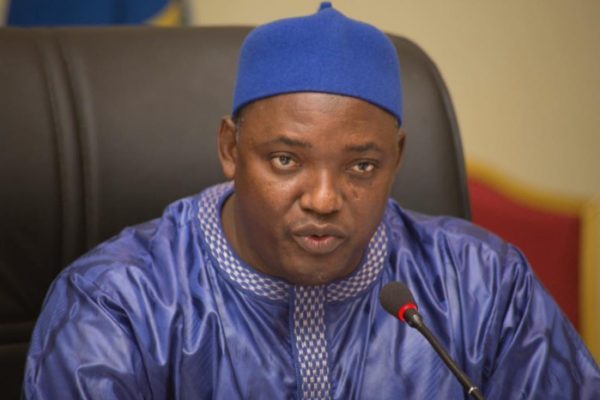 PRESIDENT Adama Barrow of the Republic of Gambia in a bid to secure his seat and consolidate his hold on power clamped down on Jammeh's loyalists in the army and had them detained since since his ascension to the presidency.
Jammeh, he feared, could make covert operations to overthrow him in a bloody coup which informed his interest and desire to launch a major crackdown on his loyalists among whom are the military officers below.
Captain Yahya Jammeh, Lieutenant Malik Sanyang, Lieutenant Yousufa Jammeh, WO1 Pa Sanneh, WO1 Ismaila Jammeh, Staff Sergeant Lamin Badjie, Corporal Dino Sanneh, Lance Corporal Mustafa Kujabi.

Others are, Lance Corporal Mbemba Camara, Sergeant Malik Bojang, Lieutenant Souleyman Sanyang, Corporal Lamin Gibba, Staff Sergeant Samboujang Bojang, Lance Corporal Aba Badjie, Corporal Lamin Nyassi, Staff Sergeant Amadou Badjie.
According to a military source, some of the detainees have spent no fewer than eight calendar months while the crackdown continues following a series of arrests made recently which the Gambian public interpreted as a covert operation and a selfish design to consolidate his hold on power.
Some military, analyst say, this is another ill-conceived plan to transform himself to yet another dictator which is being greeted with discontent from many quarters.
Follow Us on Twitter!