Home » news » Fearless Barrister: Nnamdi Kanu’s Lawyer Take Another Bold Step After His Colleagues Call For His Arrest {Must See}

Fearless Barrister: Nnamdi Kanu’s Lawyer Take Another Bold Step After His Colleagues Call For His Arrest {Must See} 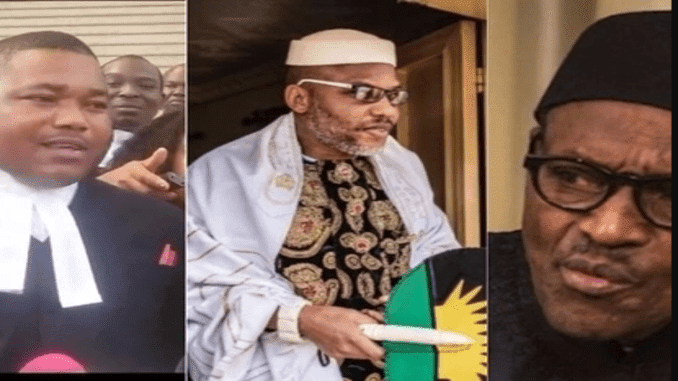 The Lawyers of Conscience (LAWCONS) is demanding for the arrest of Ifeanyi Ejiofor, the counsel to Nnamdi Kanu
The group of lawyers accused Ejiofor, their colleague, of further fuelling the agitation for Biafra
LAWCONS warned the government that it would take action if Ejiofor and others are not arrested
The Lawyers of Conscience (LAWCONS), a professional association, has called for the arrest of Ifeanyi Ejiofor, the counsel to the leader of the Indigenous People of Biafra (IPOB), Nnamdi Kanu. The group alleged that Ejiofor, aside being a lawyer, is also a member of the outlawed IPOB.
LAWCONS said the lawyer and other members and supporters still working for IPOB in the country should be arrested because it is an insult on Nigeria that IPOB led by Kanu could have the mind to file a suit before the Federal High Court in Abuja seeking for an order directing the Chief of Army Staff, Lt-Gen Tukur Buratai, to produce its leader in court.
Babatunde Oladimeji, president of the group, told journalists in Abuja on Tuesday, October 3, that Ejiofor was only out to complicate the issues by claiming that the military was in custody of his client.
“Knowing that he had grossly violated his bail conditions for his treason trial, Kanu had deliberately instigated his followers to attack troops on Operation Python Dance II drills to claim attacks on his person when they acted to defend themselves.
“In the wake of the incident of September 14 when Ifeanyi said he last saw his client, Kanu was on telephone live with a broadcast station, in which he condemned the military for repelling his fighters.
IPOB propagandist, Emma Powerful, AKA Prince Emmanuel Kanu the IPoB leader’s brother had categorically declared that they ferried the terrorist leader to safety. “Emma Powerful specifically stated in the statement on September 18 2017 (four days after the dates referenced by his lawyer) that ‘Our leader Mazi Nnamdi Kanu has made it abundantly clear to all and sundry that he is NOT going on exile as a result of these childish threats from Hausa Fulani dominated Nigeria Government’.
“He further said: ‘Major General Muhammadu Buhari and his APC band of thugs should be the ones hiding from IPOB not us from them. It is unfortunate that some people in Arewa North do not know who Mazi Nnamdi Kanu is hence they keep coming up with laughable fabrications designed to demystify our leader, to no avail’.”
Oladimeji added: “Once the court declared Kanu a terrorist after making these boasts, he realized for the first time the enormity of his transgressions and he fled further.
“He first ran to Bayelsa state with his parents and from there he escaped through Nigeria’s border with Cameroon. We all know Cameroon’s connection with France and the role France is reportedly playing in financing and supporting IPOB.

“Ifeanyi Ejiofor however contacted other members of IPOB and assured them that Operation Python Dance 2 is a good cover for Nnamdi Kanu to evade being returned to detention for breaching his bail conditions.
“He instructed the terror group’s propagandist, Emma Powerful, AKA Prince Emmanuel Kanu, the IPoB leader’s brother to change his earlier press statement and begin claiming that Kanu’s whereabouts are unknown as the military might have killed or arrested him.
“We are confident that this position will backfire on Ejiofor, Emmanuel Kanu, Nnamdi Kanu and their terror group. “Even if Kanu can successfully remain in a cowardly hiding past the October 17 date when he is due in court, he would of necessity have to resurface, at which point the entire IPOB group would have been exposed as a pack of terrorist lies that it is.
“The scenario nonetheless sets a bad precedence that must be nipped in the bud immediately.” Continuing, the president of LAWCONS argued: “It amounts to contempt of court for security agencies to not act in accordance with the court order that designated IPoB a terrorist organization.
“It sets a bad precedent and it is a matter of time before some Boko Haram terrorists would come up with their own suit asking the Federal Government to grant their leader, Abubakar Shekau, freedom of movement.
“The military and the other security agencies must not play with our intelligence as peace loving Nigerians are not ignorant of international provisions that allows for the activation of red alert for high profile terrorists.
“They should therefore approach Interpol to assist in fishing Nnamdi Kanu out from Cameroon, France or any other country he might have fled to. “Failure to do this shall force us to approach a competent court of law to compel the security agencies to arrest Kanu, Emma Powerful who heads the media team and Ejiofor who is the head of the IPOB legal team immediately.
“We will be making claims for legal expenses of the Federal Government through her agencies forces us to take this path in the pursuit of peace and safety for our fellow citizens from terrorists.”