Home » news » EXCLUSIVE: Why Diezani Is Afraid To Be Tried In UK Over Corruption Allegations

EXCLUSIVE: Why Diezani Is Afraid To Be Tried In UK Over Corruption Allegations 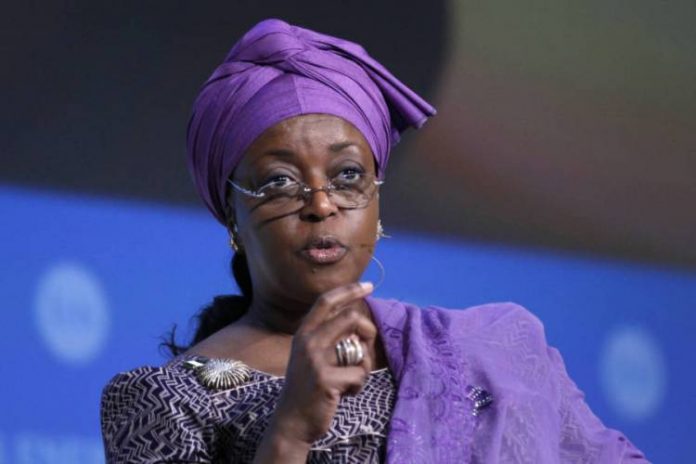 A former Minister of Petroleum Resources, Mrs. Diezani Alison-Madueke is afraid he might be jailed like the former Delta State Governor, Chief James Ibori if she is tried at the United Kingdom over multiple financial crimes labeled against her by the British Government.
Recall James Ibori was convicted in the United Kingdom of a crime he was discharged and acquitted for in Nigeria
Multiple sources close to the former second most powerful female minister of previous administration of Goodluck Jonathan told OUR reporter in confidence that Diezani prefers Nigeria corruption trial over the UK's because she could buy herself to acquittal with huge money already budgeted to that effect. This, our source said will be a herculean task, if not a total impossibility at the United Kingdom.
The former petroleum minister had yesterday approach a federal high court to seek order of her repatriation back to Nigeria from the United Kingdom
The British Government is currently investigating Diezani Alison-Madueke over various cases bothering on money laundering and illegal possession of properties.
The UK’s National Crime Agency (NCA) has frozen a £10million worth of London property allegedly bought for Diezani Alison-Madueke as investigations into the case against the former minister unravels by the day.
Two properties at Regents Park in London, along with one in Buckinghamshire, have now been frozen based on the request of Nigerian authorities.
A London court gave the frozen order in September 2016 but details of the rulings have only recently become public.
But the agency was too late in preventing a further two properties worth £8m from being sold.
In July, the U.S. Department of Justice revealed four properties it alleged were bought for the former petroleum  minister by individuals and firms seeking her influence in obtaining lucrative oil asset and crude oil lifting contracts.
Some of the oil asset were assigned to people believed to be her cronies through controversial Strategic Alliance Agreements.
The DoJ’s affidavit stated that businessmen Jide Omokore and Kola Aluko were involved in the purchase of two of the properties allegedly bought for Mrs. Alison-Madueke.
The UK order obtained by journalists at Africa Confidential has revealed that three of the properties have been frozen under the Proceeds of Crime Act.

Apart from Mrs. Alison-Madueke, Mr. Omokore and Mr. Aluko, the order also named three other individuals as defendants in the case, all of whom are believed to have received contracts or oil asset from the NNPC during the embattled minister’s tenure.
They include Aiteo’s Chief Executive Officer, Benedict Peters, a jeweler named Christopher Aire, and a lawyer named Donald Amamgbo. All received contracts from the NNPC. The order forbids the defendants from disposing of or dealing in the properties.
But although the NCA has frozen three properties worth £10 million,  the agency was too late to prevent a further two properties worth £8 million from being sold.
One of these, a massive nine-bedroom house in London’s exclusive Hampstead Garden Suburb, bought by a BVI company in January 2011 for £5,850,000- was sold in May 2015.
Meanwhile, the Attorney-General of the Federation, Abubakar Malami (SAN), on Wednesday said there was no need for the Federal Government to bring a former Minister of Petroleum Resources, Mrs. Diezani Alison-Madueke, back to Nigeria to face corruption charges.
Malami, in an interview he granted State House correspondents in Hausa at the Presidential Villa, Abuja, said the move was not necessary since the United Kingdom was already investigating the former minister.
Alison-Madueke had urged the Federal High Court in Lagos to compel the AGF to bring her back to Nigeria from the UK, where she travelled to shortly after leaving office in 2015.
She said she would like to appear in court in Nigeria to defend a criminal charge, bordering on alleged laundering of N450m, where her name had been mentioned.
The main defendants in the charge are a Senior Advocate of Nigeria, Mr. Dele Belgore; and a former Minister of National Planning, Prof. Abubakar Suleiman.
But Malami said the UK authorities were already taking appropriate steps on the matter.
The minister however said if the Federal Government later saw any reason to bring the former minister back, it would not hesitate to do so.
He said, “The truth of the matter is that steps have been taken by the United Kingdom authorities on issues bothering on corrupt practices involving Nigerians.
“If Nigeria feels strongly that there is need to bring  Mrs. Diezani Allison-Madueke here to face charges of corruption, government will not hesitate to do that.
“As things are  now, there is no need for that since the UK Government is already investigating her and government will not take any decision that will jeopardise what the UK Government is doing.”
Malami said the government was working hard on issues of corruption and litigation in Nigeria and outside the country.
He said it would be wrong to conclude that the government was not doing anything on the matter, considering the fact that there is an existing understanding between Nigeria and other countries especially UK on the recovery of stolen funds.
When asked if Alison-Madueke can get fair hearing in Nigeria, Malami said, “Well, the issue is not about fair hearing now. We are talking about investigation first and is not within Mrs. Diezani Allison-Madueke powers to ask the Federal Government to bring her to testify in any case in Nigeria.
“Mrs. Diezani Alison-Madueke is facing charges of money laundering and acquisition of properties in United Kingdom. So, it is important to face the charges there than for her to come as a mere witness in a case in Nigeria.”
Follow Us on Twitter!