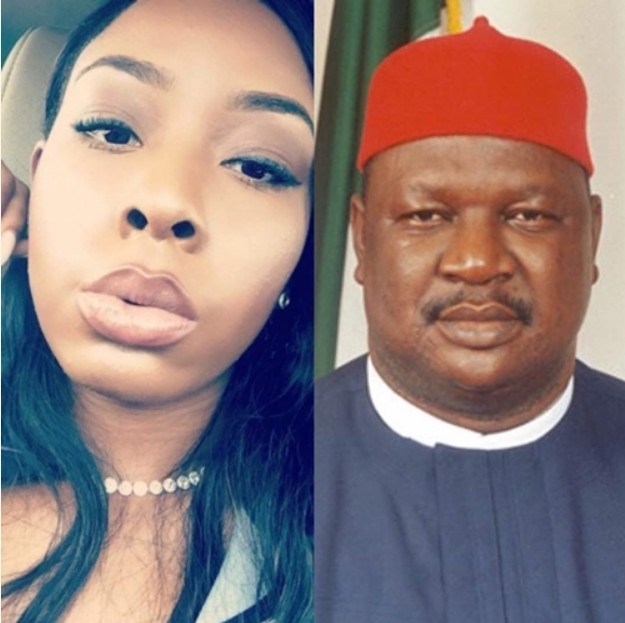 Former senate president Anyim Pius Anyim who served during President Olusegun Obasanjo regime has openly denied link with the United State-based Nigerian actress, Blessing Anyim, who claims to be Pius Anyim’s US based daughter or (alleged daughter) because of comments she made regarding the treatment of Biafra by the Federal Republic of Nigeria.
The actress had lent out her voice to address the ongoing Biafra agitation posed at President Muhammadu Buhari’s administration, saying that celebrities are in best position to use their influence on the stability of peace, which she tagged unnegotiable.
She was quoted as saying;
“Celebrities have the biggest platform to persuade or grab the attention of people. The roles celebrities can play to ensure the stability of the country can not be overemphasised. Instead of keeping mute, they should use their platforms to influence and persuade the Nigerian society at large for peace stability.”

Stressing further, Blessing lamented lack of democratic respect in the Nigerian societal system. “In this part of the world, people don’t respect the democratic system of governance the way they are meant to respect it. Of course you have the right to vote the candidates who best represent your ideas and beliefs, so when situations like this present themselves we have leaders who can come together and think of a solution to avoid the killing of innocent people.”
In a swift reaction, the former senate president said he never had any child by that name, and that all his children are based in Nigeria.

Below is his statement in full:
“My attention has been drawn to a publication credited to one “Blessing, Anyim Pius Anyim’s daughter” in (Igbere TV) online platform. I want to use this opportunity to clarify the following:
That none of my children lives or had ever lived outside Nigeria
That I have no daughter that is an actress. My only daughter just finished her first degree examination in Nigeria last month and so is yet to undergo her National Youth Service talk less of engaging in any carrier.
That as at today, I am the only politician in my house and so none of my children or even my wife has any political interest or any opinion on national issues.
May I state that the statement though may not be hurtful but is not from anybody related to me in anyway and as a matter of fact nobody in my family knows the actress under reference.
Follow Us on Twitter!