Dr. Ezeife Talks Tough Reveals Why – “Igbos Should Avoid Any Medical Treatment From The Military 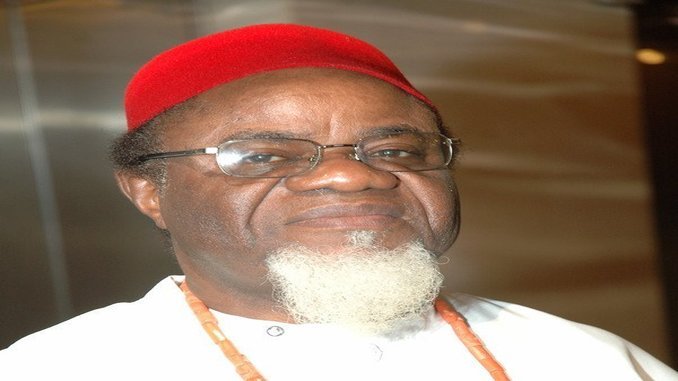 A former governor of Anambra state, Dr Chukwuemeka Ezeife has appealed to Igbos not to allow or accept any form of medical treatment from the military.
Ezeife made the plea during an interview with Sun, saying that ‘they should not allow themselves to be killed with syringes’. He said;
“Last week, I was in Anambra, a traditional ruler called me and told me that his people were called to come out on Wednesday for free medical treatment by the military. He asked me whether he should allow his people to come out for the exercise.
I told him, no, that if we could not stop them from killing with guns, we shouldn’t allow them to kill us with syringe.
But on Wednesday, they went to schools in Anambra for the free medical treatment and everybody including school children were running helter-skelter, and parents were running to take back their children in the schools.
I appeal to every parent in the Southeast to not allow their children to be treated by the soldiers. We are rich enough to treat our children.
We are grateful to the governor of Anambra State for approaching the military and advising them to stop the medical treatment of our people until we understand what they want to do.
The military should have gone to the minister of Education or the commissioner of Education or Commissioner of Health, and the governor before releasing the soldiers in a civilian population. Whether it was an intended good or evil, they approached it in a very wrong way.”
He also accused the government of harbouring ‘major hatred’ for the Igbos, he said;
“God didn’t marginalise the Igbo, but all of us own the government. President Muhammadu Buhari, when he started to make appointments, appointed more than 40 persons without one of them coming from the Southeast.
Some people from the zone who occupied offices, as soon as Buhari came to power, they were dropped. This was done at NIMASA, where an Igbo was appointed, but he was removed.
Today, when the National Security Council is meeting, there is no Southeastern person among them. The government of Buhari removed so many southern Christian officers in the army and all security agencies.

The Southeast persons dominate the list of persons removed from office by the Federal Government; the same Southeast person has no representative in the list of appointment.
Nigeria has six geo-political zones and six major political offices, namely: president, vice president, senate president, speaker of House of Representatives, chief justice and secretary to the government. The least of them is the secretary to the government, but not even that was given to the Southeast.
Major body language of the president shows hatred for the Igbo. The army massacred young men who were not carrying even sticks in Aba; they massacred other young men who were carrying Bible in remembrance of their members; they also massacred other young men who were jubilating in Port Harcourt that Donald Trump won the American election.
Python Dance by the army has not been held in Kaduna, Katsina, Kano, Northwest or Northeast, but not only are they occupying Southeast militarily, so many people have been killed, and more people have been used as tools for humiliation and dehumanization.
You saw the videos, where some people were forced to drink mud water; others forced to swim in muddy water, and other forms of humiliation.
There are so many indications of hatred and marginalisation. Are you talking about infrastructure in the zone? The federal roads are not passable; the money spent by state governments on federal roads is not refunded them so that they would not have money to fix federal roads.”
Follow Us on Twitter!