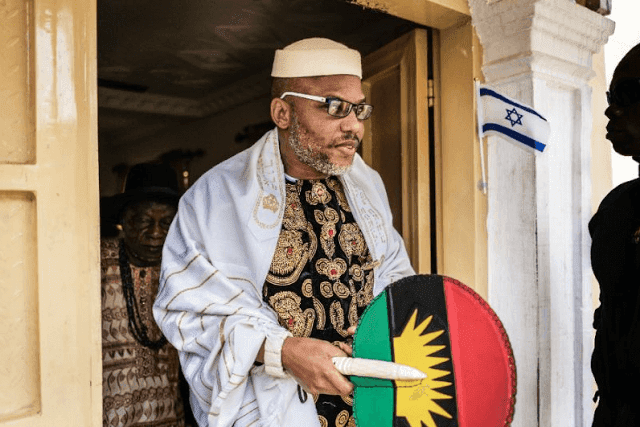 By: Dr. Perry Brimah.
The alarming plausible situation captioned is of pertinence in view of pro-Biafra secessionist leader Nnamdi Kanu’s absence in court this week. It has been a month and three days since Nnamdi Kanu was last publicly seen or heard of. Nnamdi Kanu’s disappearance occurred on September 14th, the day of an alleged raid by the Nigerian military on his residence in Umuahia.
The raid captured on video and according to various narratives, saw Kanu’s home riddled with bullets both inside and out with at least 26 reported killed including the Kanus’ dog called Jack. Independent recordings have shown bodies strewn. There was no formal media presence because ahead of the assault, the Nigerian military first raided journalist posts, beat them up and smashed all their equipment to bits.
Since the raid, Kanu, his parents and several of his family members have never again been seen or heard from. They have been reportedly killed or abducted alive by the Nigerian military. A forensic analysis of a video from Kanu’s home during frightening the military raid detected a voice that sounded like his within the bombarded building at at least two points in the recording [Listen:


The plausibility of their murder and a secret mass burial cover-up comes up due to the precedence of identical behavior by the Buhari administration.
In December of 2015, after a similar raid on Zaria’s Shia minority Muslims by the military under Commander in chief Muhammadu Buhari, hundreds of Muslims killed at over 5 different locations were secretly mass buried in the middle of the night to “conceal the crime.” The Kaduna state government itself made a late confession to this crime when it opened up on the military-state secret mass burial of 347 Nigerian youth at the Mando cemetery.  The confession came in April, after ENDS.ng and Amnesty international had discovered and exposed the Mando mass grave and government cover up.
Again, PremiumTimes has an exclusive report of another secret mass burial by the Buhari administration which took place in Onitsha in 2016 after a massacre of pro-Biiafran agitators. This time the bodies of about 100 youth were reportedly secretly buried in a military grave yard. That report is captioned, ” SPECIAL REPORT: How the Onitsha massacre of pro-Biafra supporters was coordinated — SSS operative .”
Based on the multiple cases above, it becomes necessary to inquire if once again the Buhari government’s extra-judicially perambulating military has secretly murdered and secretly buried the Kanus.
*Why The Rush To proscribe IPOB?*
The hurried designation of Kanu’s IPOB as a terrorist organisation with the Nigerian military and eastern state governments making several blunders in their anxiety, also piques curiosity. Why was the Nigerian government in such a hurry to proscribe IPOB? Was it to intimidate and suppress legitimate public inquiry into the happenings of September 14th at the residence of Nnamdi Kanu?
After several embarrassing blunders, the Buhari government succeeded in proscribing IPOB at the fastest rate any organization has ever been proscribed in Nigeria’s history. Even most deadly terrorists like the Fulani militants who kill and average of 1000 Nigerians a year, are still concealed and condoned by the Buhari government that proscribed IPOB within days of its “illegal” military operation and raid on his residence. It must be noted that constitutionally the Nigerian military has no role in civil law enforcement, crime control; is not authorised to make raids and has no handcuffs, and obviously no role in making intra-state arrests. The Nigerian constitution only gives the military a role secondary to and in support of the civil authorities (police).
*Buhari’s Defense of Boko Haram Against Military Murder*
Importantly, the after-the-event designation of IPOB as a terrorist organisation fails to prevent the legitimate inquiry into the events of September the 14th and demand for full police investigation into the actions of the Nigerian military on and around Nnamdi Kanu’s residence. It is recalled that no one shouted louder against the extra-judicial killing of Boko Haram founder Mohammed Yusuf, Buji Foi and other Boko Haram terrorists than current president Muhammadu Buhari.
Buhari lamented against the brutal military action by the Jonathan government against Boko Haram. According to theNation , a current government affiliated editorial, in 2013, Buhari, then a northern elder statesman, decried Jonathan’s military assault on Boko Haram, saying that they should not be killed but should be rewarded as Niger Delta militants had been[See: http://thenationonlineng.net/buhari-faults-clampdown-on-boko-haram-members/ ]. The report has never been denied by Buhari who recently honored Bamanga Tukur, the former PDP chairman who notoriously said that Boko Haram was fighting for justice and was another name for justice as reported in the Punch on May 16th of 2012.
Nnamdi Kanu is not a Nigerian known for uncanny skills at escaping capture. He has been captured and arrested and locked up three times already in his short life. Recently he so cheaply presented himself in a hotel in Lagos, making it a breeze for the Buhari government to arrest him. It is therefore easy to imagine that he was available at the time of the raid and was either abducted by the vengeful, Boko Haram primed blood seeking Nigerian military or killed by them on the spot.
The possibility of Kanu’s assassination is again evoked based on how the Nigerian military dealt with the Zakzaky’s according to their eye-witnessing surviving daughter, Suhaila. The Buratai military reportedly killed three of Zakzaky’s sons pointblank in front of Zakzaky and wife Zeenat, when they were found in a room that survived the burning down of their home. Zakzaky himself was shot four times and his wife shot three times pointblank. Critically wounded, they were then further degraded, carted away in wheelbarrows. Therefore it is quite plausible the Nigerian military murdered Kanu and his family on sight and buried them secretly as happened in Zaria.
The Nigerian police in what can only be regarded as gross and criminal incompetence, left the raided home without cordon after the raid, thus jeopardizing a full in-depth investigation. We may likely never know the truth.
Dr. Perry Brimah.
Follow Us on Twitter!