Home » news » BREAKING! See What Is Happening To Billionaire Kidnapper Evans Hours After He Alleged Police Stole These 10 Items From Him {Must See}

BREAKING! See What Is Happening To Billionaire Kidnapper Evans Hours After He Alleged Police Stole These 10 Items From Him {Must See} 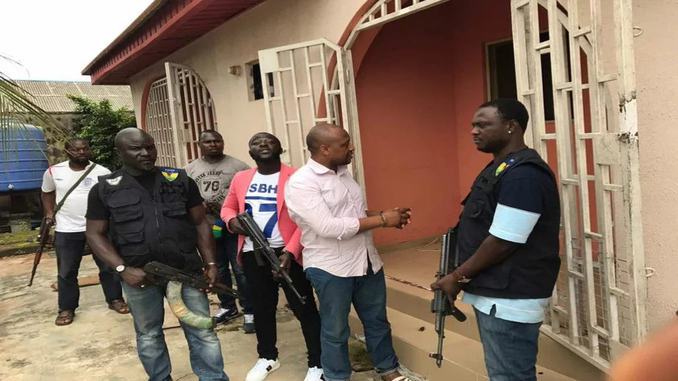 Billionaire kidnapper Evans accused the police of stealing cash, valuables from him, his lawyer wrote a petition listing the items stolen
He also accused the police of molesting his girlfriend Billionaire kidnapper Chukwudumeme Onwuamadike popularly known as Evans has raised serious allegations against police officers accusing them of stealing money from his house.
In a petition by Mr. Olukoya Ogungbeje who is the counsel to the kidnapper, it was alleged that officers of the Inspector General of Police’s Intelligence Response Team took cash and valuables from his house.
These allegations were contained in the petition sent to the Police Service Commission, National Assembly, the Inspector General of Police, the National Human Rights Commission, and Amnesty International.
The lawyer also accused the police of molesting Evans’ girlfriend, Amaka Offor. Read the petition below: “Our client has duly briefed us on the above captioned subject matter involving the police officers and policemen attached to the Inspector General of Police Intelligence Response Team.
“For the avoidance of doubt, it is our secured brief that in the course of investigating our client while being detained in the custody of the Inspector General of Police Intelligence Response Team (IRT) on the allegation of kidnapping, the following under-listed items were forcefully and corruptly extorted from our client.
“1. The sum of N50, 000,000 (Fifty Million Naira) cash.

“2. Another sum of N5,000,000 (Five Million Naira) sent by our client’s wife as pressured by the above policemen.
“3. Twenty-five (25) Mack Trucks forcefully taken but not listed as exhibits in the ongoing criminal trial of our client.
“4. Brigade wristwatch worth One Hundred and Seventeen (117) Thousand U.S Dollars.
“5. Pendant cross worth Seventy (70) Thousand U.S Dollars.
“6. Necklace worth Twenty-Five (25) Thousand U.S Dollars.
“7. Virtu Phone worth Thirty (30) Thousand U.S Dollars.
“8. Virtu Signature Phone worth Seventeen (17) Thousand U.S Dollars.
“9. Ten (10) Thousand U.S Dollars cash extorted by ASP Phillip Rieninwa.
“10. Five (5) Pieces of Saphono Rucci Diamond Rings worth One Hundred (100) Thousand U.S Dollars.
“11. Lexus 470 Jeep.
“12. Grand Cherokee Jeep.
“13. L 400 Mitsubishi Bus.
“14. Toyota Highlander (Gold Colour).
“15. Eighty-Five (85) Inches Samsung Television set worth 6.5 Million Naira amongst others.
“our client also confided in us that one (Amaka Offor) his girlfriend was molested and abused by the above policemen of the Inspector General of Police Intelligence Response Team (IRT).”
“Sir, you would agree with us that these allegations are too weighty to be ignored by any right-thinking Nigerian. “There is no gainsaying the fact that it calls for prompt investigation, inquiry and appropriate sanctions.
We are using this medium as our own way of galvanizing institutional sanity, cleansing and reform in the Nigeria Police Force as an institution.
“As we speak, the brother in law and other relations of our client are still being detained and tortured by the Inspector General of Police Intelligence Response Team.
Follow Us on Twitter!