Home » opinion » BREAKING: Obasanjo Again Wades Into Maina’s Saga, Threaten to Do This Should Buhari Spare Maina In His Fight against Corruption {Must Read}

BREAKING: Obasanjo Again Wades Into Maina’s Saga, Threaten to Do This Should Buhari Spare Maina In His Fight against Corruption {Must Read} 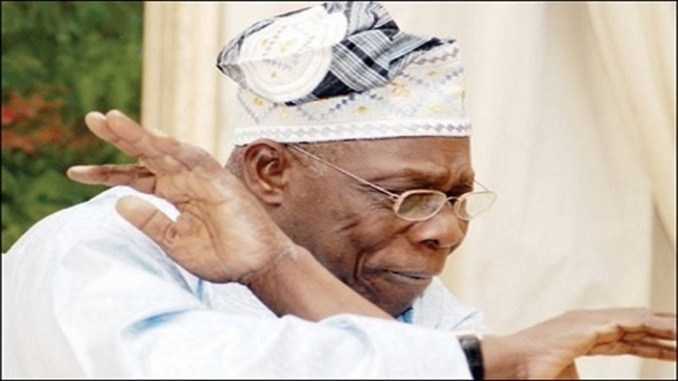 Chief Olusegun Obasanjo said the recall of Maina should not have happened
The former president blamed corruption for most of the country’s problem – He said the EFCC and ICPC have been politicised and weakened Former president, Chief Olusegun Obasanjo has reacted to the botched recall of a former chairman of the Pension Reform Task Team, Abdulrasheed Maina, saying it should never have happened.
Thisday reports that the former president spoke at the 2017 Foundation Day Public Lecture titled: “Corruption and the Challenges of the African Child” on Saturday, October 28 in Ibadan. The former president identified corruption as the key cause of Nigeria’s problem and insisted that the fight against it must be comprehensive.
He said: “Corruption must be punished, and must be seen to be punished. Any accomplice in corruption and cover-up and any failure to punish must also earn punishment. “We cannot afford to have sacred cows in the fight against corruption.
The Maina saga should never have been allowed to occur. It is not in tandem with the fight against corruption.” “When I was elected President in 1999, my administration took the issue of corruption very seriously and we established Independent Corrupt Practices and other Related Offences Commission as well as Economic and Financial Crimes Commission, among other anticorruption initiatives.
These institutions were provided the political support needed to fight corruption and they did their best. “But once we left office, they became very politicised and weakened to the point that they were unable to discharge their duties.
In fact, one of the governors, who had been labelled and gone to jail for corruption, was to look for replacement for Nuhu Ribadu (the pioneering chairman of EFCC), and you know the type of replacement he would get.
“There is need to support and strengthen these institutions, especially in the area of prosecution. The law enforcement agencies or the government alone cannot fight corruption. They must be supported by a judiciary that is upright and transparent.
It is very demoralising to law enforcement officers when they painstakingly investigate a case and the culprit finds his way around the judiciary to escape. “Individually and collectively, we have to be mentally restructured.
We must change our mind-set as a people. We must all return to our core values of hard work, honesty, integrity, justice, equity, fairness, humanity and communality. In other words, we need to go for more rearmament.
“We cannot continue to celebrate criminals, who enrich themselves from our commonwealth, and think that corruption will disappear. Those who loot the public purse must be seen and treated as undesirable in the community, rather than celebrate them.
They should not be made to feel welcomed in our families, religious bodies and societies. If a person strips himself or herself of humanity and dignity by stealing public or private funds, we should not clothe them, respect or admire them.”

“This is where many of our religious leaders have to discriminate in favour of teaching the scriptures and our cultural values. They anoint criminals for their ill-gotten wealth, and demonise the poor. We must show our young people that there is dignity in labour and reward in transparency and integrity.
Perhaps, this is one area where organisations like DOHAL must continue to invest. We must celebrate and promote our young people, who exhibit traits of transparency, integrity, honesty and accountability. This will encourage others to emulate their examples.
“There is a need to make the youth an integral part of the fight against corruption. Young people are the greatest assets of any country. They have the energy, the passion to act as change agents if they are well nurtured and included in the fight against corruption.
The added advantage of youth inclusion in the anti-corruption process is that they have technological tools that make transparency and accountability easier. “But I see hope and a great future ahead.
There are Nigerians of world-class standards, characters, attributes and performance, if we’ll only look deep. We should encourage them and celebrate them wherever we may find them.” “Corruption breeds poverty, crime, insecurity, instability and generally inhibits growth and development. It underdevelops and kills.
I am currently researching on the situation in the north-eastern Nigeria for my thesis in Christian Theology. And what I found is most alarming. “One of the reasons that members of the extremist group, Boko Haram, gave for their insurrection is that they became disillusioned, when they saw how corrupt Western educated leaders were.
According to them, if those who occupied government offices by virtue of their Western education would corruptly enrich themselves and deprive others of the basic things of life, then that education is ‘haram’, which means forbidden.
“I am told that when Mohammed Yusuf, the original leader of Boko Haram and his early followers first started, they all gathered and tore their certificates, because they said a certificate, which could not fetch them a source of livelihood, is useless to them.
Similarly, they saw Western education as corrupting the individuals. “We may not agree with their position, but the disappointment and disillusionment of citizens over the inadequacy or poor performance of their leaders is real.
Adding rising corruption to other inadequacies in leadership and we’ll see the instability and insecurity, which we have witnessed in the North-east in recent years.”
Follow Us on Twitter!