Home » news » BREAKING! Nnamdi Kanu Finally Re-Arrested In Early Morning Invasion Of His Country Home Again, See The Shocking Thing His Lawyer Threaten To Do Next Must See}

BREAKING! Nnamdi Kanu Finally Re-Arrested In Early Morning Invasion Of His Country Home Again, See The Shocking Thing His Lawyer Threaten To Do Next Must See} 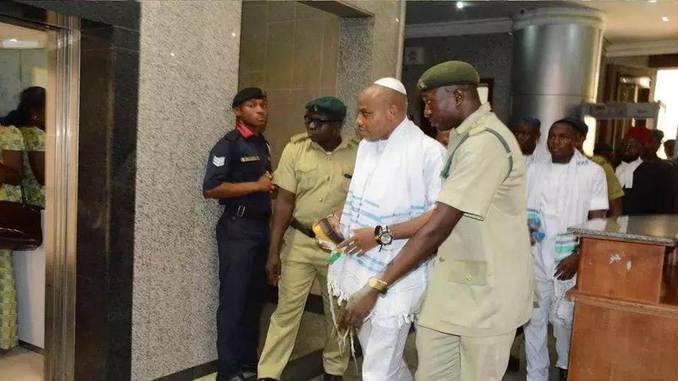 Nnamdi Kanu‘s lawyer, Ifeanyi Ejiofor has claimed that soldiers of the Nigerian Army invaded the home of the leader of the Indigenous People of Biafra (IPOB) earlier today.In a statement, Mr Ejiofor accused the Nigerian Army of declaring war on Mr Kanu and supporters of IPOB.
“The Military has declared war on the innocent, unarmed and defenceless civilians. Sporadic shooting is going on in the premises of Nnamdi Kanu now.
“The situation is serious. My client’s whereabouts has remained unknown. His entire house has been shattered with bullets and missiles.
“The soldiers had just forcefully gained entrance into his house after shooting for about 40 minutes. His entrance gate was broken and forced open. Their mission is still unknown as every person seen in his house has surrendered, including his aged parents.

“We will avail the world with the pictures of these dastardly acts,” Mr. Ejiofor said.
The lawyer called on supporters of Biafra to remain calm in the face of what he described as “unprovoked killings.”
“In the face of this unprovoked killings, torture, abduction and malicious destruction of property, I still appeal for calm from IPOB members. Just be assured that the entire world is watching.
Do not take up arms, continue to conduct yourselves in the most civilized manner you are well known for,” Mr. Ejiofor said.
Follow Us on Twitter!