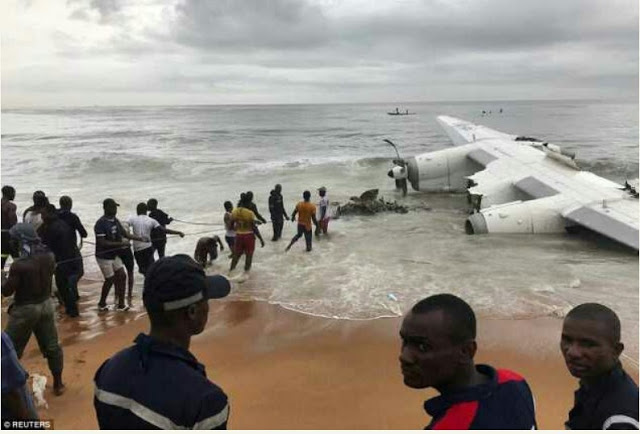 At least four people died when a 42-year-old Soviet-built cargo aircraft crashed into the ocean while trying to land in Abidjan, capital city of the Ivory Coast.
The aircraft, which was carrying cargo for the French military broke up after crashing onto the beach.
Several members of the crew survived according to reports on local media.
The airport management company confirmed that six of the crew were injured with two of them in a serious condition.
Locals attached ropes to the aircraft’s tail in an effort to drag the wreckage back ashore to assist crash investigators. ‘There were 10 people on board, Moldovans and French people.
The four victims who died are Moldovan nationals.
‘The plane had taken off from Ouagadougou in Burkina Faso and crash-landed in the sea near Abidjan, breaking in half, he explained.
The aircraft was on final approach to the runway when it plunged into the ocean some 500 metres short of the runway.
( Witnesses said the aircraft crashed into the ocean and broke into several parts before it could land at the airport.
Miraculously, six people were pulled alive from the wreckage of the aircraft and are being treated in a French military camp. The aircraft, pictured, was an Antonov An-26 operated by Moldovian airline Valan Air who were on charter to the French army Ange Koutaye Ismael, said he saw four bodies carried out of the plane, which had been broken in two in the shallow waters.

He said he was at home when he noticed a plane flying low over his neighbourhood.
When he heard a plane had crashed on the beach, he ran down to film it.
Stormy weather probably played a role in the crash, he said.He said:
‘There was winds yesterday and I saw how planes seemed to have difficulties in getting up.
‘Chrisian Kouame, who also lives near the airport, said he was awakened before 7 am by a loud noise.
‘We thought at the beginning it was the waves of the sea in the rain, but the cries of our neighbors caught our attention.
When we went out we saw the aircraft broken by the beach.
Airport authorities were alerted and rescue workers were immediately sent to help recover those wounded.’