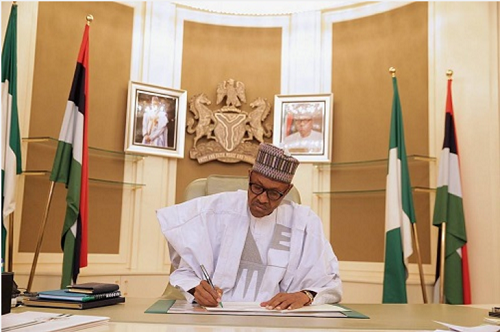 President Muhammadu Buhari has appointed Mrs. Aishah Ahmad, as Deputy Governor of the Central Bank of Nigeria.
According to a statement on Thursday by his Special Adviser on Media and Publicity, Mr. Femi Adesina, the President had presented Ahmad to the Senate for confirmation.
Adesina said the woman would replace a former Deputy Governor, who retired early this year.
“In accordance with the provisions of Section 8(1) (2) of the Central Bank of Nigeria (Establishment) Act 2007, President Buhari urged the Senate President, Dr. Bukola Saraki, to consider the expeditious confirmation of Mrs. Ahmad, who would then resume work immediately,” the statement read.

The presidential spokesman added that Buhari had written the Senate, seeking the confirmation of appointment of members of the Monetary Policy Committee of the CBN.
He said the appointees were to replace four members, whose tenure expires at the end of this year.
“The nominees are: Prof. Adeola Festus Adenikinju; Dr. Aliyu Rafindadi Sanusi; Dr. Robert Chikwendu Asogwa and Dr.Asheikh A. Maidugu.
“After Senate clearance, the new members of the Monetary Policy Committee are to resume duties next January,” the statement added.
A banker and investment adviser, Ahmad has over 20 years certified experience with global financial institutions such as Stanbic IBTC Bank, Zenith Bank PLC and Bank of New York Mellon among others.
Follow Us on Twitter!