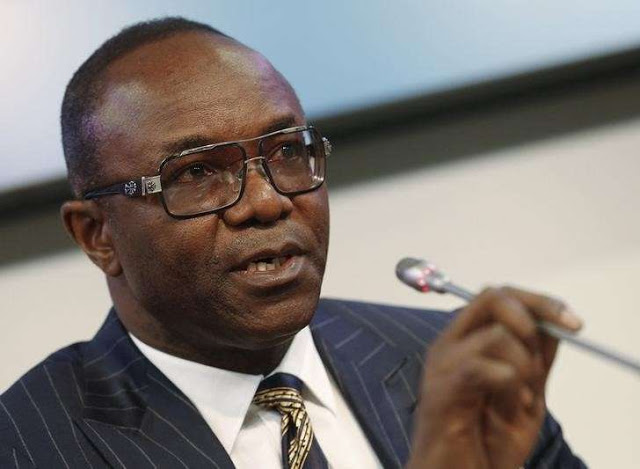 Ibe Kachikwu, minister of state for petroleum resources, wrote a letter to President Muhammadu Buhari, over the alleged insubordination of Maikanti Baru, group managing director of the Nigerian National Petroleum Corporation (NNPC).
In the letter seen by TheCable, Kachikwu accused Baru of undermining his (Kachikwu’s) office and dragging the reputation of the NNPC into the mud.
He also said he was being sidelined based on allegations that he is corrupt, anti-north and conspiring in collusion with militants.
Below are six highlights of the petition:
‘UNDERMINING THE MINISTER’S OFFICE’
Kachikwu said since Baru’s assumption of office, he has failed to consult and carry him along in the activities of the corporation. He alleged that acts of misbehaviour by Baru were already hindering all the envisaged positive changes for the oil and gas sector.
The minister said he decided to bring the issues to the attention of the president after one year of tolerating “these disrespectful and humiliating conducts”. He said he would have preferred to personally discuss the issues with the president but he had not been able to secure an appointment despite many attempts.
Kachikwu appealed to Buhari to intervene and “save the NNPC and oil industry from collapse arising from above non-transparent practices and empower the board you inaugurated to do the needful”.
“That you save the office of the minister of state from further humiliation and disrespect by compelling all parastatals to submit to oversight regulatory mandate and proper supervision which I am supposed to manage on your behalf,” he wrote.

ANTI-NORTH ALLEGATION
The minister said he had been accused of working against the north and also influencing the appointments of some persons. He denied the allegations and described himself as a “completely detribalised Nigerian”.
“I have lived my formative years in the east, west, north and south-south parts of the country,” he wrote.
“All my appointments were generated with key inputs from all the COOs of the NNPC and were balanced and based strictly on skills, experience, drive and ethnic balancing for senior management position.
“I have never betrayed the trust you placed on me. I did not deploy any public financial resources to achieve the results in the Niger Delta.”
APPOINTMENTS WITHOUT DUE CONSULTATION
The minister said he was not consulted in most of the appointments made by Baru. He said he learnt about them on social media or through press releases. Kachikwu explained that on one occasion, he held a meeting with the GMD to raise concerns about the appointments and also wrote a letter to him, but that Baru ignored him by making some changes without his involvement.
He appealed to the president to suspend these appointments.
“I resumed work confronted by many publications of massive changes within NNPC. Like the previous reorganisations and repostings done since Mr Baru resumed as GMD, I was never given the opportunity before the announcements to discuss these appointments,” he wrote.
“This is so despite being the minister of state petroleum and chairman, NNPC board.
“The board of NNPC which you appointed and which has met every month since its inauguration, and which by the NNPC is meant to review these planned appointments and postings, was never briefed.
“Members of the board learnt of these appointments from the pages of social media and the press release of NNPC. The above is just one of the many occurrences of disrespectful experience with the GMD as your minister of state.”
In August, fifty-five management staff of the corporation were affected in a shake-up. The reshuffling raised dust, with Ohaneze Ndigbo, apex socio-cultural organisation of the Igbo, alleging that the north was clearly favoured while “the south-east totally ignored”.

ASSIGNMENT OF CONTRACTS WITHOUT DUE PROCESS
Kachikwu said against the rules, some major contracts were never reviewed or discussed with him or the board of NNPC. He listed some of the contracts as:
The crude Term contracts- value at over @$10bn
The DSDP contracts – value over $5bn
The AKK pipeline contract- value approximately $3bn
Various financing allocation funding contracts with the NOCs- value over $3bn
Various NPDC production service contracts- value at over $3bn-$4bn
“The legal and procedural requirement is that all contracts above $20m would need to be reviewed and approved by the board of NNPC Mr President, in over one year of Mr Baru’s tenure, no contract has been run through the board,” Kachikwu wrote.
“This is despite my diplomatic encouragement to Mr Baru to do so to avoid wrongfully painting you as a president who does not allow due process to thrive in the NNPC.”
‘CONSPIRING WITH MILITANTS’
In response to the above allegation, Kachikwu said: “nothing, your excellency, can be further from the truth”.
“I mention this because this will be the likely response you will receive to this attempt I am making to alert you on the state of affairs under the GMD’s leadership,” he wrote.
“I have done nothing during my time at the NNPC or the ministry that is corrupt or laced with any such intent. Anyone peddling any contrary information is resorting to cheap blackmail.”
REDEEMING THE IMAGE OF NNPC AND OIL INDUSTRY
Kachikwu said the public impression about the NNPC is that of corruption and in-transparency in its activities.
He appealed to the president to instruct the GMD to leave the NNPC to run as a proper institution and report out along due process lines to the board.
“Given the history of malpractice and the public perception of the NNPC as having a history of non-transparency, the NNPC Tenders Board (NTB) cannot be the final clearance authority for clearance it enters into,” he said.
“The open administration I introduced with your support in our year of pushing reforms, has been completely eroded. NNPC staff are afraid of contacting me for the fear of being punished, sidelined in appointments and targeted.
“The effect of the attitude of the GMD and the sidelining of the board is that there is a fear culture in NNPC.
“However, truth is that given global challenge in this sector, we must aggresively pursue out of the box ideas on rejuvenating this sector, getting the best yield and increasing our earnings from oil and gas.
“To do otherwise or to exempt any of the parastatals would be to emplace a stunted growth for the industry