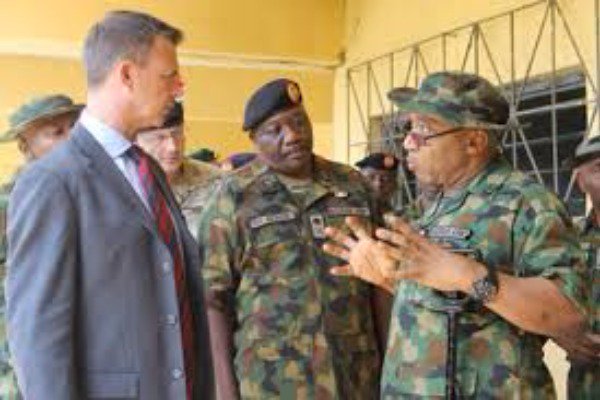 A United States of America based human rights group called “Rapid Response Fact-Finding Mission (RRFFM)” has asked President Muhammadu Buhari to immediately withdraw troops from the south-east zone of the country.
The group also told the President to consult with the various state governors in the region on the necessity or otherwise of military operations and deployment of soldiers in the area.
The United Kingdom is providing expert training to the Nigerian military in helping to develop the skills necessary to tackle the terror threat of Boko Haram in North East Nigeria. Boko Haram’s Islamist insurgency began in 2009 and has killed at least 20,000 and forced more than 2.6 million from their homes. / AFP RRFFM also urged the International Criminal Court, ICC to investigate alleged cases of human rights abuses meted out to the people.
The calls followed a field investigation conducted by the group in the aftermath of the military invasion of the home of the leader of Indigenous Peoples of Biafra, IPOB, Mr. Nnamdi Kanu Umuahia, the Abia State capital and also the deployment of soldiers to the south-east region for a military exercise code-named “Operation Python Dance 11”.
A statement signed and released by the Special Counsel Justice for Jos Project, a US/Nigeria Law Group in Washington DC seeking to end impunity in the Nigerian Genocide, Emmanuel Ogebe on Monday stated that members of the team were drawn from US and United Kingdom.
Ogebe in the statement stated that the team carried out extensive investigations into the recent crisis in the region and catergorised its recommendations as follows:
“The President of Nigeria should stand down the troops in the southeast till their mission scope is clearly defined and clarified and necessary legal benchmarks for deployment are met or better still redeploy them to northern Nigeria where on the Niger side of the border terrorists suspected to be Boko Haram killed 4 American troops last week.

“The President should consult the state governors as chief security officers of their states on the necessity or lack thereof of military deployment
“The military should apologize to and return the seized phone of a journalist “The army should desist from further acts of aggression, intimidation and rights abuses of civilians including continuing attacks on the already destroyed home of Afara Chief Kanu
“The army should identify for court martial its personnel who ransacked and man handled innocent journalists in their press center.
“The army should disclose the true casualties of its operations and provide compensation to the victims while arraigning the perpetrators
“The government of Nigeria should allow the trial of IPOB leader Kanu to continue under the established framework of the legal system instead brute military force. Failure to do so could force the further metastization into yet another insurgency which Nigeria simply cannot afford on an eastern flank
“The government should as a matter of urgency provide treatment and compensation to the victims and families in a confidential manner that does not expose them to terrorist-labeling
“The government should close the “governance gap” exemplified by infrastructure deficits at local levels that are deep drivers of discontentment and frustration in an ordinarily industrious and entrepreneurial populace.
“The international community and the Nigerian government should investigate the human rights abuses to ensure justice is done especially as the 50th memorial of the Asaba massacres is marked for which no perpetrators have been brought to book half a century after.
“The government should revisit the National Conference report that has encapsulated a lot of the institutional injustices that undermine equity and FairPlay in the Nigerian contraption

“The International Criminal Court should look into the military abuses in the southeast as part of its ongoing preliminary examination into Nigeria’s security forces.” In a similar vein, the group’s also findings implicated the Nigerian Army in the “unprovoked” attack of Journalists in Umuahia amongst others.
“In its interim report and observations, the RRFFM finds as a fact: “Personnel of the Nigerian army attacked and molested members of the Nigerian Union of Journalists during an unprovoked invasion of the journalists’ press center, destroying and confiscating journalistic equipment in September
“The Nigerian Army attacked and destroyed the home of a Chief in Amara, Umuahia who is the father of IPOB leader Nnamdi Kanu who lived with him also in September
“Several people were killed in Umuahia and several neighborhood homes and properties affected “Nigerian security forces engaged in reprisal attacks in Aba after IPOB members overran a military checkpoint “Several people were killed and maimed in Aba
“Suspected IPOB members stopped and searched vehicles for reprisal attacks on northerners as well as targeted house searches “Good Samaritans and the army helped hide and evacuate innocent targets including incidentally a citizen of Niger who has since fled to his own country.
“The military were not invited in by the eastern state governments and indeed the governors were already in dialogue with the separatists on their concerns “While the military presence has been scaled back from the streets and relative normalcy has been restored, the whereabouts of Nnamdi Kanu remains a mystery
“There appears to be a serious lack of transparency or sincerity by the army on its true mission to the southeast, casualties of its operations to the public and even to the state governments
“Suspected members of IPOB burnt a police station and attacked a mosque UPDATE “RRFFM has just received credible photos and footage of another raid on the home of Nnamdi Kanu’s family in Umuahia captured on CCTV yesterday Sunday October 8, 2017”, the statement added.