Biafra: Why We Want IPOB to Change Name – Igbo Group in Diaspora 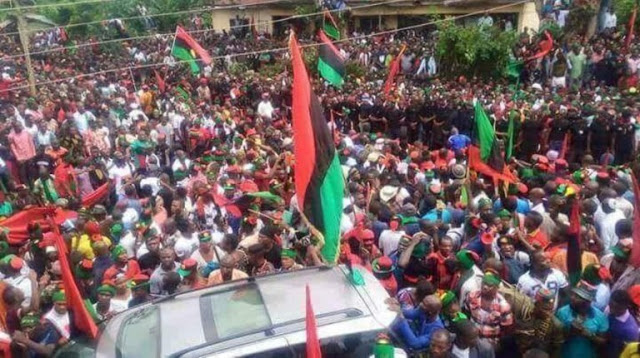 An Igbo group in the Diaspora, known as the Biafran Government in Exile, BGIE, has suggested that the proscribed Indigenous People of Biafra, IPOB, changes its name to Zionist Movement of Jews in Africa South of the Sahara and continue their push for a sovereign state.
The group has also set up a Biafran Steering Committee, made up of professionals in the Diaspora, to meet and discuss the next line of action following the proscription of IPOB by the Nigerian Government.
A document from a member of BGIE, Dr. Peter Ejirika, obtained by Punch, said, “Definitely, we have been aware that referendum is a critical point on the Biafran success, but the question is how do we collectively get on this path?
“An integral part of the answer is the realisation that IPOB is only but an infinitesimal echelon of the search for the self – determination of Biafra and ultimate sovereignty.


“Invariably, the push should continue under a different name. Thus, the ultimate outcome of the proscription of an unarmed entity as a terrorist organisation should be the change of its nomenclature from IPOB to Zionist Movement of Jews in Africa South of the Sahara.
“Hail Biafra, I need to remind us that the Israelites had to pass through the desert to make it to the Promised Land.
“Metaphorically, Nigeria, to all intents and purposes, is our Egypt while Biafra is our promised land. Fellow Biafrans, listed below are the names of Biafran Steering Committee members, who would be contacted to meet, at some point to discuss the philosophical question of where do we go from here?”
Those identified as members of the committee in the document, include Lady Edith Ogechi Okeke, Dr. Afamefula, Dr. Achike, Dr. Oguchi Nkwocha, Ihediwa of Houston, Peter, Evans Anuforo and Dr. Clifford Iroanya.
IPOB spokesman, Emma Powerful had in a statement yesterday said there was no plan to change the organization’s name, insisting that IPOB was not a terrorists group.
Follow Us on Twitter!