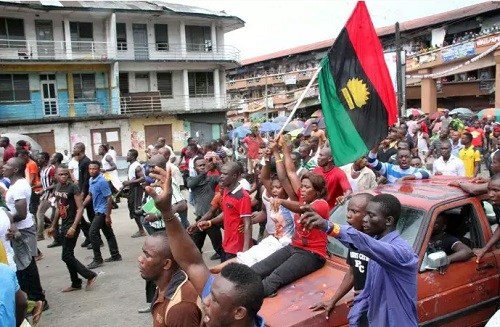 IN a concerted effort to overcome the psychological and emotional devastation of the October 7, 1967 massacre in Asaba, the present day capital of Delta State, indigenes of the town have organised a three-day event to celebrate the victims of the horrific event with a focus on forgiveness and rebirth.
The event, which coincides with the 50th anniversary of the sordid event, will hold from tomorrow to Saturday, in the ancient town and will have Nobel Laureate Prof. Wole Soyinka as Special Guest of Honour with Bishop of Sokoto Diocese, Matthew Kukah as Guest Speaker while former governor of Cross Rivers State, Mr Donald Duke, will chair the event. Other speakers include President-General of Ohaneze Ndi Igbo, Chief John Nnia Nwodo, and former External Affairs Minister, General Ike Nwachukwu (retd.).
Addressing a world press conference in Asaba, the Asagba of Asaba, His Royal Majesty, Prof. J. Edozien, said that the town decided to commemorate the event because the people love Nigeria and want it to remain united and indivisible.
The Asagba, who spoke through the Iyase (Traditional Prime Minister) of Asaba, Chief Patrick Onyeobi, urged Nigerians to strive to evolve a system of government that will guarantee justice to all.
He said: “We, the people of Asaba, have decided to collectively come out and tell the world the story of our unfortunate and tragic experience 50 years ago, which left many of our people badly traumatised. We are telling the story because we dearly love our country Nigeria and want it to remain united and indivisible.
“We will not like the same mistakes that led us to the unfortunate Nigerian civil war (1967-1970) which produced the Asaba massacre of October 7, 1967 to be repeated so that history does not condemn us, particularly the present generation of leaders of our country as history has done the Bourbons of France, who history recorded as having “learnt nothing, forgotten nothing and mastered nothing from their history. “We must strive to evolve a system of government that guarantees justice to all.”
Chairman of the Memorial Group, Alban Ofili-Okonkwo, who reeled out the anniversary programme, said the event will involve sensitisation and citizen engagement programmes in order to achieve healing and closure which will “signal the collective resolve of Asaba indigenes to leave behind the memories of their tragic past and walk resolutely into a more promising future.”
He added: “The activities will separately and collectively pay deserved tribute to the dead and also designed to help galvanise Asaba people towards rebirth and healing.
“The commemorative activities will commence on October 5 with a one-minute silence for the Asaba martyrs at Noon. It was on that day 50 years ago that federal troops stormed Asaba ransacking homes and killing civilians who they claimed were Biafra sympathisers. Other commemorative activities include media briefing, canon shots heralding traditional burial rites for the dead (known in Asaba culture as egwu ota). Also planned are service of songs and candle light procession to Ogbeosawa grave site for tributes to the dead, interdenominational service, exhibition of artefacts, documentary and presentation of awards to honourees.”
He further stated that the anniversary activities will include the presentation of a book on the carnage entitled “The Asaba Massacre- Trauma, Memories, and the Nigerian Civil War” authored by renowned Anthropologist, Prof. S. Elizabeth Bird and co-authored by distinguished historian, Prof. Fraser Ottanelli both of the University of South Florida.

“The book presentation will, however, be preceded by the hosting of A Colloquium on the Asaba Massacre, with the theme: “In Pursuit of Rebirth”. Eminent scholars, statesmen, renowned industrialists and other distinguished citizens of the world are expected to attend the activities marking this year’s anniversary. The activities will be rounded off on October 8, with thanksgiving service in churches in Churches all over the world,” Ofili-Okonkwo said.
He disclosed that Noble Lauret, Prof. Soyinka, Catholic Bishop of Sokoto Diocese, Kukah, and President-General of Ohanaeze Ndigbo were among dignitaries that had confirmed that they will be part of the event.
He stated that the campaign messages for the aniversary include: //WordsnotWar; //AsabaRebirth; //WeRememberWeForgive; //MyplaceofbirthAsaba; //remembranceandforgiveness.
The press conference was well-attended by Asaba chiefs and elders who narrated in tears their experiences of the massacre and how they became the survivors.
According to their narrations, a recap of the gory story was that in 1967, at the thick of the fratricidal war, the Nigerian federal troops forced the seceding Biafran troops back across the Niger, into Onitsha, which lies directly across from Asaba. In a bid to stop the enemy’s pursuit, the Biafran’s blew up the eastern spans of the bridge on the Onitsha end. The triumphant Nigerian troops would soon become a kill joy for Asaba indigenes for no sooner did the federal troops entered Asaba that they began ransacking houses and killing civilians at random claiming they were Biafran sympathizers.
In a bid to stop the rampaging troops, Asaba elders and leaders quickly summoned their people to assemble on the morning of October 7, hoping to end the violence through a show of support for “One Nigeria.” However, after hundreds of men, women, and children, paraded along the main streets in support of a unified country, men and teenage boys were separated from the women and young children, after which the federal troops opened fire, killing the people in cold blood. It is estimated that more than 700 men and boys were killed, some as young as 12 years old. This number excludes the many who were killed in the preceding days. The federal troops went ahead to occupy Asaba for many months, during which most of the town was destroyed, women and girls raped or forcibly “married,” and a large numbers of citizens fled, many not returning until the war ended in 1970.
Vanguard