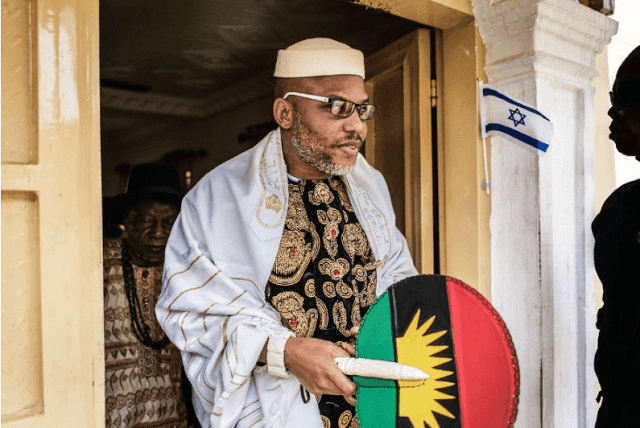 A former Abia State House of Representatives aspirant, Ndukwe Ikoh, has faulted the agitation by the leader of the Indigenous People of Biafra, IPOB, Nnamdi Kanu.
Ikoh said the struggle by Kanu had no clear plan for secession, stressing that he, Kanu, recruited “people who sell or consume hard drugs in the South-East as well as some petty thieves” as members of IPOB.
He maintained that the IPOB leader deviated from the original plan on how to achieve Biafra as laid down by warlord, Odumegu Ojukwu.
Speaking with The Sun, Ikoh said, “The Biafra struggle that started since 1957 by Odimegwu Ojukwu has a very serious concept upon which it was built and this concept was and is still very vital to Nigerians, especially those from the Southern part of the country.

“It had to do with those who were marginalized and not allowed to develop their potentials, and then there was the serious issue of ethnic mistrust between the north and the south which led to the attempt to break away from the rest of the country.
“Kanu’s cause is a little divergent from the original because Biafra was a cause that was built on the need for equity and justice. And it involves people from the South East and some part of the South/South that felt that they were unfairly treated, that was what gave rise to Biafra.
“Kanu has reduced the struggle to an Igbo struggle and painted the Igbo as if they were at war with the rest of the country, that is one of the areas he got it wrong.
“If you will remember, Ojukwu was the ‘president’ of Biafra while Brigadier Effiong was his deputy. So you can see that Biafra was not entirely an Igbo cause. He has no clear plan to push the secession drive. There is no way the Igbo can secede from Nigeria without alliance and representation from the global bodies like UN and AU.
“I don’t know the plan Kanu put in place to attract the sympathy of such bodies. Locally, he got it wrong because there was no way you can be enemies to the neighbours you want to join to become a republic. For instance, he called Ijaws all sorts of names and once referred to Niger Deltans as cowards.
“Even calling Nigeria a zoo was an error because if Biafra eventually secedes, Nigeria will still be their neighbour. He also failed to galvanise the Igbo leadership and make sure that they were on the same page with him. At a certain stage, IPOB members became miscreants. People who sell or consume hard drugs in the South East as well as some petty thieves became members of IPOB.”